I saw a couple of videos from seasoned Linux users who’ve ‘moved away’ from the Linux platform in general.

Thought it gave another side to the story.

Let me know if you watched the video in the comments

I’m one of them. I’ve been using Linux since 1995, and am switching over to BSD. It started with systemd taking over more and more of the system on Linux (I heard an interview with Lennart in which he said that they wanted systemd to “own everything between the kernel and the application layer.” ) and for me it has been buggy. Maybe that is just my systems, because were built long before the transition to systemd. My DHCP/backup server can no longer reboot without human intervention. It is the fact that I have a fixed address on the machine. I know I can do it “the systemd way,” but that seems as likely as not to change again. And their supplanting of the core unix ethos, like the absorption of su because Lennart thought it was a “broken concept” and so he set out to “fix” it. It’s the mission creep of systemd that gets to me.

At the same time, I started listening to BSD Now, and started reading about ZFS and OpenZFS, and it seemed rather compelling. Like BTRFS only it actually worked/was production ready. Well, I set up a FreeNAS box to replace my ageing Linux fileserver with the dying hard drive…Then I converted my desktop to PC-BSD. Currently, I am have a replacement firewall to replace my over powered iptables rig, and it runs pfSense. The next step is to replace my DHCP/backup server with FreeBSD, then probably my Proxmox-VE servers, which are holding on Debian/Wheezy because I don’t want to stick my hand into the sausage grinder that is systemd for my containers (openvz).

Another thing is that in general, the BSD community is on average 10 years older than the Linux community. The BSD community, whether on mailing lists or IRC, is friendlier and more helpful than the Linux community, in my experience. In the BSD community, I have gotten help with a FreeNAS problem or a pfSense problem in the PC-BSD irc channel. On the other hand, I was told " in the future, please don’t come here" because I asked a question about a broken upgrade in Debian unstable on #debian in freenode (which apparently is only for questions regarding Debian/stable. I also had to drop off of the debian-user mailing list because it devolved to nothing but bickering and flame wars, and had very little useful content.

I have no qualms about learning new things (hell, I am doing that with BSD and ZFS), but doing it to serve what I see as the hubris of the systemd team doesn’t fly with me. Just my 2 cents.

I dinged Linux as a desktop platform around 2008. I was tired of the bullshit about driver support, application quality, etc. So I went with the (IMHO) far superior OS X. Once you go Mac, you never go back.

Once you go Mac, you never go back

I use a mac for browsing the web and checking email.
I still like a GNU/Linux box for development and stuff.

IMHO there are lots of wonderful desktop environments, but driver support etc is still not great.

I tried OS X a few years ago for vaguely similar reasons but it never stuck. Not sure if it’s a common but after a few of the updates the system just got really slow (a la Windows) so soon jumped back. I think the quality of all Linux aspects has gone up a lot recently.

Used a Mac, went back. With a brief period of using Linux on that Mac.
Its only real use was “not being windows”.

. I really like Apple’s hardware, but the software not so much.

Once you go Mac, you never go back.

As a former Mac developer, allow me to disagree with this statement with the utmost gusto.

is starting to look like “once you go Mac, if you’re Neuro, you never go back, but others aren’t as seduced”

I have been using Linux off and on since the early 90s. I am actually running the most desktop Linux ever right now and very happy about it. I have 2 laptops and a rpi2 running Linux and the only non-gaming machine running Windows (I am NOT an Apple guy, even though I agree they have good hardware… their software is meh and their walled-garden ecosystem has no place in my life) is my wife’s machine. I am thinking about converting that to Linux as she only does web browsing and email and doesn’t need Windows.

As for my gaming rig… sigh… I had removed Win10 from it last month and tried to make a go of it with Linux. Sadly, Linux gaming, while getting better every day with SteamOS and ports of decent games (Feral Interactive is doing amazing work), is still not ready for a serious gamer. (check out this benchmark for a recently ported A-list game F12015 compared to Windows: https://www.gamingonlinux.com/uploads/articles/article_images/1464176676linuxvswindowsgol.png ). So I reluctantly went back to Win10 on this box. I was very disappointed that my desire to use Linux for gaming failed in 2016.

Desktop Linux is fine for me. The driver support requires more work than on Windows or OSX but I have no issues with any of my machines in terms of device support. Maybe I am just lucky.

I use a Mac desktop at home for everything. Ubuntu at work because I can’t have a Mac – and it does me fine. For all non-work development, though, I use an Ubuntu VM, which I run without a display manager and SSH into, because I’m old school and live on the terminal.

Actually, the only reason I went to Mac in the first place was that I wanted a first-class Photoshop and Lightroom experience and didn’t want to run Windows.

Why is it a shame, though? Surely computing freedom should allow the freedom to choose whatever OS we want to run, without being judged?

I bet you briw a good coffee with dat.

Surely computing freedom should allow the freedom to choose whatever OS we want to run, without being judged?

I have been looking for a while now for something I saw over 20 years ago. It was an image of Bill the Cat in his usual dignified pose (ack!) with the heading “DON’T DO DOS!” Wish I could find that thing, it was good.

Wish I could find that thing, it was good. 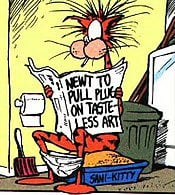 r/wikipedia - Bill the Cat is commonly seen as a parody of Jim Davis' Garfield...

The one and only! A Presidential candidate too.

I bet you briw a good coffee with dat.

Since it’s silly o’clock in the morning and my phone doesn’t do ogg, I have no idea what that means.

Ahh the price of proprietory sw