Wikipedia dumps (and other large data sets) on a phone

In the old days it was possible to get a ZSomethingOrOther database for Palm IIIx devices which was the whole of Wikipedia. I’ll have a look around for conveniently compressed DB dumps

(update: http://en.wikipedia.org/wiki/Wikipedia:TomeRaider_database was the Palm thing!)

What you want now is Aarddict. This has a nice set of downloadable things (WIkipedia, Wikiquote, dictionaries, etc) in “slob” format, which has a simple Python parser and yet is nicely compressed. So if someone were to want to write an app which has all this stuff, using these “slob” dictionaries is the way to go, especially since the Python utility to read them already exists and would be relatively easy to drop into an app.

Of-course @sil the ultimate caveat for the @TheGuyWhoLovesChill who’s trapped on a desert island would be to be able to edit the entries ( even perhaps the talk pages ) - or would this lead to too much disturbance in the force ?
Viewing is one thing - having your own wikibooks editor is a license to conduct your
own offline-orchestra !

… and something similar has been muted before.
Although the infinite loop means I need a milky- twinnings.

Update: Wait, your telling me this was commented by @olli and not @sil - Oh well, any excuse for a perfectly good cuppa tea !

I’m not sure if your still a fan of this going ahead or not @sil .

But just to let you know - they had a very similar discussion at the very start of the flyspray bug-list over on
Rockbox, which has been going since Mar. 2006
Abit off topic, but just thought you’d be mildly interested.

And as far as I know - they still haven’t got it sorted out yet, even though the feature was “re-opened”.

Let me know if you’ve had an other ideas about this as I’d like to be cognisant of the coding issues involved. 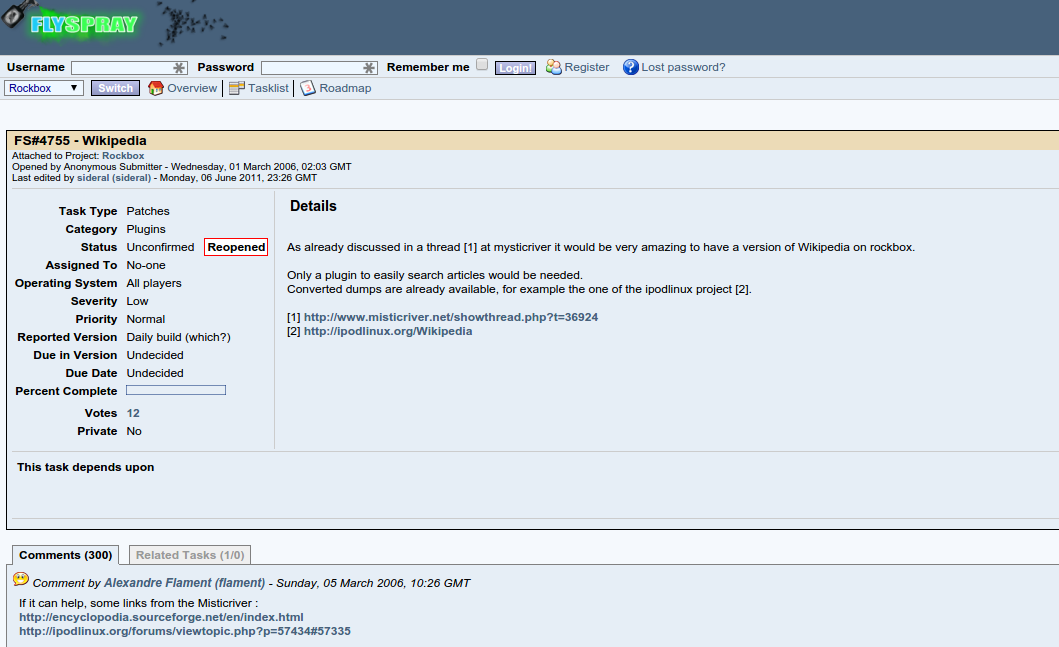