What makes Rokus with Plex so good?

Continuing the discussion from 1x05: Never Gonna Give You Up:

Maybe I’m missing something about why using Plex Media Server and a Roku box is so good, if you primarily watch local stuff rather than streamed-from-netflix stuff?

Hey so nothing beats “It’s working, don’t mess with it” but I can tell you why I prefer plex.

First off, I hate maintaining PCs, Rokus with Plex are literally no maintenance. Sure I do some maintenance on my home server but even then if you were truly lazy they have Plex server packages for common NAS gear that’s as easy as installing an app.

For the clients I like that the Rokus use little power, and have no fans, so it’s quiet, and on top of that the box is very simple to hide. Also the Roku has an excellent remote control. The Roku 3 has an headphone jack in the REMOTE. This (simple) feature is awesome for a bedroom client, one person can sleep the other can keep watching TV.

My choices when using XBMC were any existing RF remote. That means for my media centers I have to pick some of the worst designed hardware ever made. Here’s one of the first hits for “simplified remote” in Google: 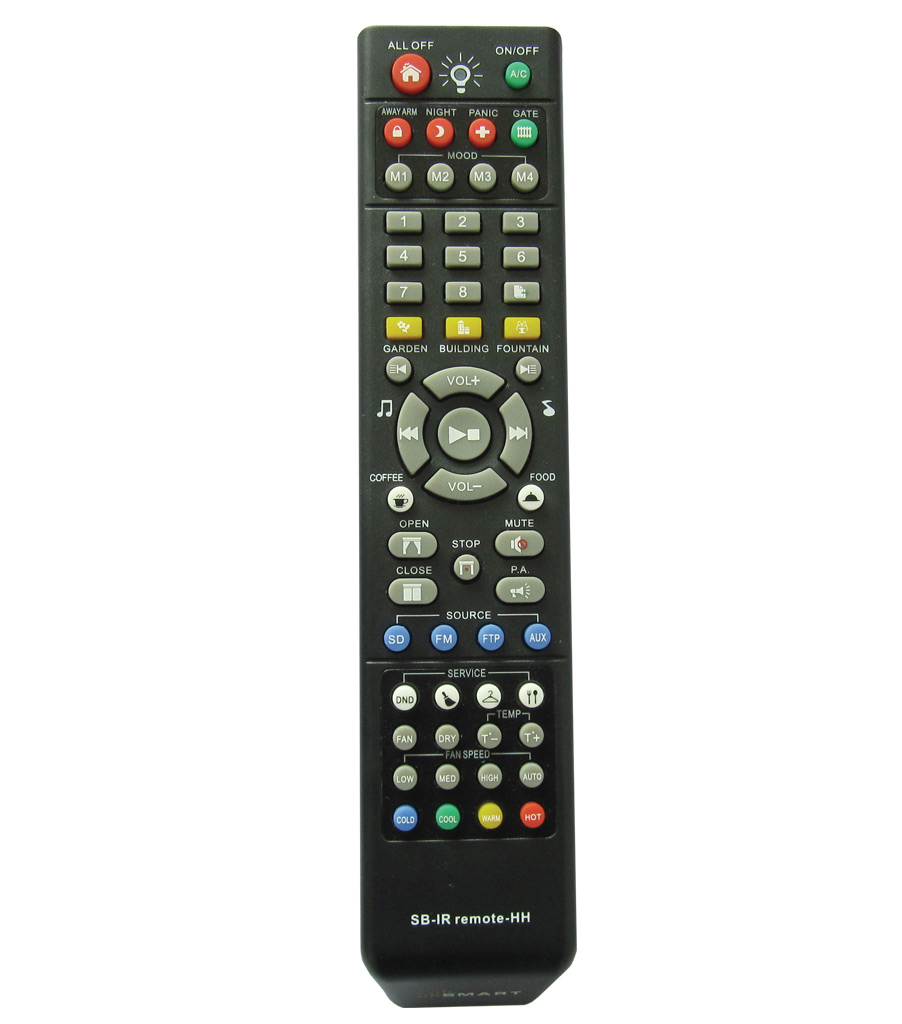 NO THANKS. This is nicer, though you could get rid of the 2 extra buttons if they didn’t care/worry about trying to be a PS One Half: 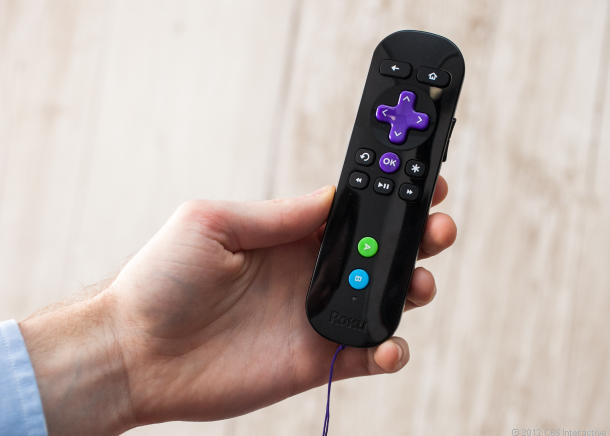 Another nice thing about the newer Rokus is the remotes are RF instead of IR, so you don’t have to care about pointing it at the device.

Ok so for Plex itself, @sil here was the feature that sold it for me. Automagic tablet syncing. So on my Android tablet I have plex installed. Sure you could use it as a remote but I don’t use it for that.

I go on a trip, watch 3 episodes, come home, I do nothing, Plex figures out that those episodes are watched, removes it from the tablet, and then puts the next three unwatched episodes (in order) on the tablet. Every time I go somewhere it keeps track on where I am in a show no matter what device I am on.

If I don’t go on a trip and watch 5 episodes at home it’s smart enough to say, hey Jorge watched those and will continuously sync to the tablet.

And here’s the bad:

Also the mobile apps are not free (they’re like 5 bucks) and you need a PlexPass for PlexSync (the tablet thing I was describing), which is like $30 a year. I find the features to be worth paying. I don’t consider having a pay model to be bad per se, but some people don’t like that, shrug.

OK, that tablet sync thing is nice. I don’t have a tablet, so it’s not useful to me, but if I did I’d like that a lot!

Remotes… I use my phone, as does Niamh. Who wants a big plastic thing which just gets lost?

All I am guessing is that this Roku tries to do an XBMC in a consumber box with some, to me, limitations.

My biggest issue is I don’t own a flat screen, dont see one coming any time soon. My TV at most does S-Video so a lot of these streaming boxes completely ignore us with legacy equipment, who play a lot of local content. Streaming is nice but, better to have your own content. So with a spare box that is quiet, 2 teribites of space for my collection, I cant see why I would add a Roku to the mix, or why I would want to.

Plus I have heard Roku can’t play some file codecs even with plug ins. Which that alone makes me very hesitant to go to a roku instead of a HTPC - XBMC solution, so I can’t see what all the buzz is about.

I Understand you can put XBMC on a Roku. I recycled an old PC into an XBMC media box and frankly, use it much more than my Samsung Smart TV box.

Listened to s01e05 last night and thought I’d stop by here to say the Roku does support playback of local content and was pleased to see @jorge has already mentioned Plex. Plex and Roku are a match made in heaven. I’ve imported all our DVDs, HD-DVDs (I know) and Blu-Rays into our Plex server using MakeMKV and Handbrake, currently 779 films.

That said, some Roku models also have USB ports and/or microSD card readers built in. There is a free Roku app for playing content from USB/microSD card in the Roku Channel Store. So, if you are not technically capable enough to setup a Plex server there is a local content playback option.

The Plex app for Android features a Chromecast capability so you can “beam” content from your phone/tablet to a Roku and the app also acts as a remote control. Koushik Dutta’s AllCast Android app (currently in beta) also fully supports Roku. I’ve bought the lifetime PlexPass so I can access my Plex content from anywhere on any device, I am effectively my own NetFlix.

Maybe Plex should be reviewed by Bad Voltage?

The Roku LT, Roku 1 and Roku 2 come with a cable that connects to composite video on legacy TVs. The advantage of using Plex with a Roku is that Plex will query the Roku for codec compatibility and perform on the fly transcoding if required. It is true the local playback from USB/microSD is limited but comparable to other device of this type.

Can I point XBMC at Plex Media Server and get the benefits of this magic transcoding stuff, so I can try out Plex? Alternatively, is there a non-XBMC open source Ubuntu fullscreen TV client for Plex Media Server?

I see the lists and think:

This my XBMC does flawlessly. Personly speaking I hate h264 codecs as most are a bear to transcode to anything useful. (english subs by default on, for an english show etc, not to mention for clips for other projects).

I have a LOT (Close to 10 T) of local content so streaming is nice but not a high priority for me. I don’t own a Tablet or a Smart Phone (Waiting on Ubuntu versions

) So to my eyes a Roku/Plex means buying the Roku, dealing with Plex, two parts that are closed source, vs XBMC which is opensource and 1 part. Easier to maintain one part to do the job.

I can see handing a Roku to my father who might find it cute, but I just cant see useing it my self when I have an Opensource way thats better, and less complicated, and more under my control. And keep the $49-$89 and simply buy another Hard Drive with the money.

Yes, this is how I originally got started when I used to run XBMC. You want the PleXBMC plugin.

There is also Plex Home Theater that is a desktop client that runs on many distros including Rasplex for the Raspberry Pi.

Interesting. So, how does the magic transcoding work? Does XBMC know which format this particular machine will be able to play most effectively, so that it can report that to Plex Media Server and Plex Media Server can transcode to it? For example, I have two XBMC machines: one a raspi and one an Acer Revo. The raspi has pretty strict limits on what it can play as high-quaity video with hardware acceleration; the Revo less so, but I bet it still has some. I totally do not want to have to learn myself which formats and codecs are best to use for each device, because life’s too short. If XBMC + PMS can make that determination for me, I’m very interested in it.

As I understand it when a Plex client requests playback of file from a Plex server there is a negotiation whereby the client tells the server what codecs (audio and video) are natively supported. The Plex server will then stream the content to the client in a format that it can play natively. So yes, Plex makes the determination for you.

The transcoding happens realtime on the Plex server so you need a server that is reasonably powerful. I am running my Plex server via a plugin for Open Media Vault on an HP N54L Microserver, which is not the most amazing CPU, but can transcode 1080p on the fly no problem.

The transcoding is not all or nothing either. Lets suppose I have a film with H264 video and DTS audio and my client supports H264 but not DTS. Plex will send the video without messing with it but the audio stream will be transcoded to something that my client does support.

The transcoding can also be used to ensure you can stream content based on available bandwidth. So, on my LAN I have the wired clients set to accept anything up to 1080p @ 20Mbps. However, my wireless Roku LT I have set to a maximum of 720p @ 8Mbps. This mechanism also translates to devices when connecting to your Plex server remotely. I was recently travelling in Germany and streamed some films to my laptop in the hotel using the hotel WIFI which was capped at 2Mbps per customer. I set my Plex client to 768p @ 2Mbps and eveything worked without a hitch. I used the airport WIFI to stream some TV episodes to my phone using 720p @ 1Mpbs.

Plex Home Theater is Open Source client made by Plex. It is essentially XBMC with the Plex goodness included. I run this on several Linux laptops as an application but it can also be run on a media player device in the same way you can with XBMC now. You can also access your Plex content via any web browser and there are apps for every mobile device.

I was a very happy XBMC user for a long time but I dabbled with Plex on and off a few times, it was never really ready for prime time. But Plex hit it’s stride some months back and that’s when I switched and soon after replaced XBMC/PleXBMC with Rokus. Roku has a very high WAF.

I love Plex, but it is not perfect. Music management and playback is beyond shit. So, I recommend you don’t even frustrate yourself with it. However, if you want to stream Films, TV and Home videos then IMO I don’t think Plex can’t be beaten. The meta data collection and management is brilliant, I can access my content on any device from anywhere and my wife and daughter love it.