I do love apt but these tools seem plenty powerful so far.

zypper has an aptitude shell - just run aptitude with the command options you’re used to, and they’ll be translated to zypper calls for you.

One reason for me is I ended up listening to this podcast because of my resurgent interest in Linux and my successful experience with OpenSuSE. Sure, I may have started with some other shows filled with false self importance, a constant barrage of schilling, and general hypocrisy, but I got that sorted out just as I did with my choice of Distro’s.

Now for some real reasons, well, real to me anyway:

It’s probably obvious that I am not a ‘power user’, more like a man in the ditch with a shovel, but the above things are important to me.

Particularly the beer.
Can I get it in Montana?

jump the shark like the Debian family seems to

Interesting; can you explain that a bit more?

Because I’m an engineer, here’s a chart that got me thinking:
http://upload.wikimedia.org/wikipedia/commons/1/1b/Linux_Distribution_Timeline.svg
I would prefer to stick with a distribution that doesn’t split/ fork, have drama in it’s community, etc. You know WAY more about the LInux world than I do I’m sure, but the stories about Ubuntu desktop and Debian forking and Mint splitting off don’t give me confidence that something crazy isn’t just around the corner. I’ve used Ubuntu for a while and tried Mint recently. These are all really cool but I just don’t have the time resource to track and decide which to use.

Maybe I’m wrong and I just have more to learn about how these things work.

You mean https://en.opensuse.org/openSUSE:Beer ? Sorry, not in the US. Yet.

So… we’ve got two threads going now for this. Here, and the feedback thread .

more to learn about how these things work

There’s a distinction here, I think; you’re seeing a “fork” as being a bad thing which causes drama. In the other thread, the SuSE people are rather proud of how SuSE Studio contains eleven thousand different “respins” of SuSE. A good proportion of the Debian “forks” are like that; people taking the known-good base of Debian and building a “customised” version of it which meets particular needs. The most prominent example of such a thing is Ubuntu, which by virtue of some of the good engineering and popularity became itself a base on which people could make “flavours” of Ubuntu (Kubuntu, Lubuntu, Ubuntu Studio, and the like). Occasionally there are “respins” which define themselves a new identity and compete against the “parent”: Ubuntu arguably did this with Debian, and Linux Mint do it moreso with Ubuntu. But this “forking”, in both the Debian ecosystem and the SuSE ecosystem, is pretty much seen as a sign of health – you have the freedom to take a well-engineered base and customise it to your liking, and then also the freedom to let other people easily use your customised version if it meets their needs too. There is, occasionally, drama when a “flavour” or “respin” feels that it’s mistreated by the “parent”, or vice versa, but that’s human nature for you; I suspect that anyone who makes a SuSE respin and then finds that it’s broken by changes in OpenSuSE itself feels similarly aggrieved. But these are minor issues.

Here’s a graph of some SuSE Studio respins, so you can see the point; I grabbed details of about 200 of the spins to make the graph, but the actual graph would be a lot more complicated, because there aren’t 200 spins, there are eleven thousand.

“Splitting off” is not drama. It is a good thing.

So… we’ve got two threads going now for this. Here, and the feedback thread .

To be fair, that’s the official thread for the episode (where any topic we discussed in the episode is fair game) while this is the thread specifically asked for in the episode to discuss openSUSE. Because of this, I don’t think a merge make sense.

Ok Lunduke, im backed up and ready to rock it like an OpenSUSE party, w00t w00t.

Seriously if this takes my entire day off im gonna be pissed. also have a ubuntu cd standing by.,

So not going so good so far, maybe its something i did wrong but huh?

set my location to uk in the installer location window and when i logged in the keyboard was set to US, opensue…rly bro? rly?

The 1st pane of the install wizard, titled “Language, Keyboard, and License Agreement” allows you to independently choose the language and keyboard. Why? Because things don’t always match. For example, lots of Germans end up with US layout keyboards on their laptops.

But honestly, I think it’s pretty obvious, but maybe that’s just me… 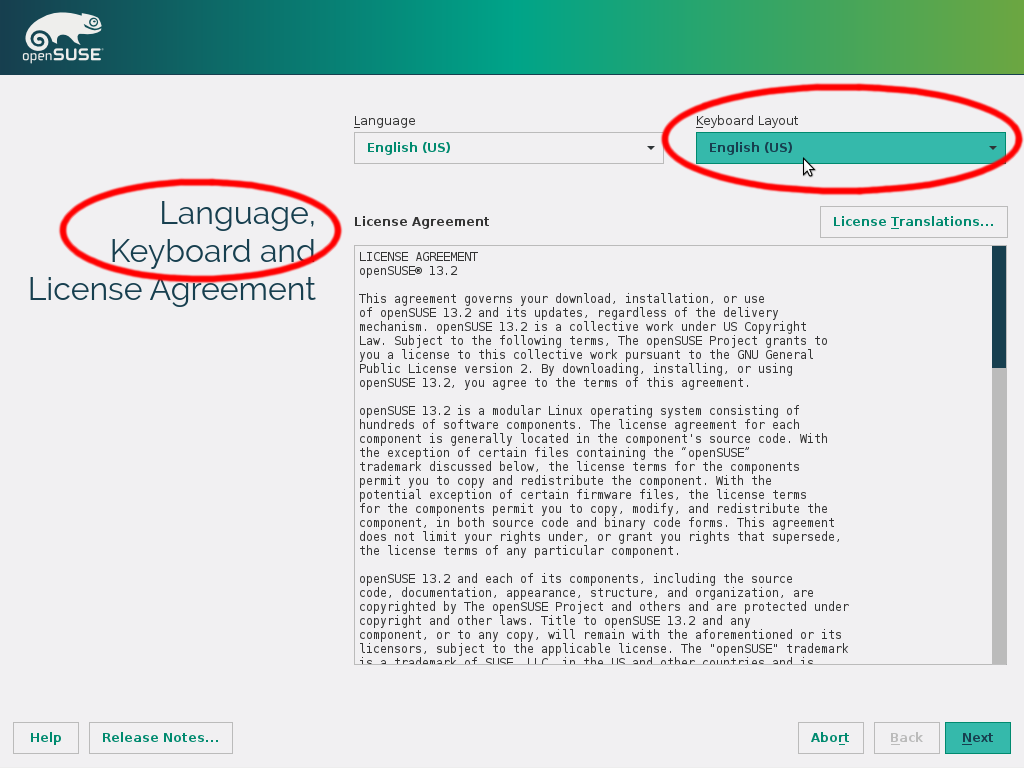 independently choose the language and keyboard

Sure. I like the idea of them being independently chooseable. But they should default to the right thing, no? In a similar way, I have to choose a language for the EULA even though I’ve already chosen one for the installation. It is right that it’s possible to do these things in every combination, because it leaves nobody behind, but I think some extra thought could go into not asking as many questions right out of the box. Still, the impression I’m getting after having used SuSE for a little bit this week is that the SuSE philosophy differs dramatically from mine on this point.

On the “Create New User” pane, you were asked about auto login, although to be fair it used different language: “automatic login” I see where that could be confusing. 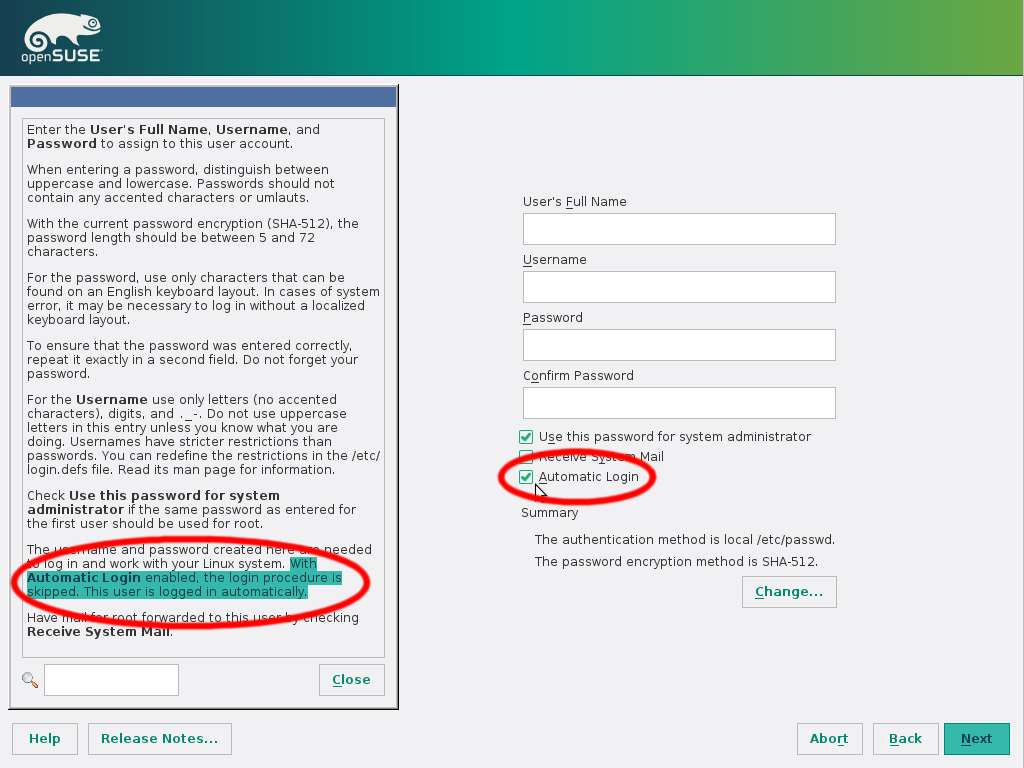 I don’t understand the admin account thing, though. Unless you did some magic elsewhere… you’re not root.

you were asked about auto login

Heh. I had the opposite issue. Told it to autologin and it didn’t. This may be for the same reasons that caused me to get icewm even though I chose enlightenment; maybe the ancient login manager thing it installed for me doesn’t know how to automatically log in…

Auto login does depend on the DM; I know it works on KDM & GDM, and I assume it works on LXDM. I’m quite certain XDM predates it by a couple generations.

The 1st pane of the install wizard, titled “Language, Keyboard, and License Agreement” allows you to independently choose the language and keyboard. Why? Because things don’t always match. For example, lots of Germans end up with US layout keyboards on their laptops.

But honestly, I think it’s pretty obvious, but maybe that’s just me…

Putting the final install choice of keyboard layout on the “accept EULA” page you must admit thats a bit random. wheres the network dns settings, under a picture of a duck?

Im not flaming you personally but some of opensuse’s gui choices seems a bit odd to say the least.

Ok i missed the auto logon tick-box, my bad but shouldn’t that be off by default?

Auto login does depend on the DM; I know it works on KDM & GDM, and I assume it works on LXDM. I’m quite certain XDM predates it by a couple generations.

Ya, but at that point you’ve already asked me which desktop I want. So you know whether the login manager you’re going to choose supports autologin, and can therefore prevent me from ticking a box which you know isn’t going to work. Someone will say “but that’s hard! that means we have to have that installer page adapt itself depending on previous choices!” and I will say: yes, yes you do.

Ok installed, So the installer when it finished rebooted without a prompt first, i thought it crashed. Dont do that again opensuse

It did prompt first. It just didn’t wait very long - 10 seconds may be too short here, but then again, you can’t do anything with the machine until the reboot happens, so why wait?

Rest assured, it only happens once, and only during the install. The Live images are more clear about this, as there’s an assumption you might actually be working with the machine during setup. 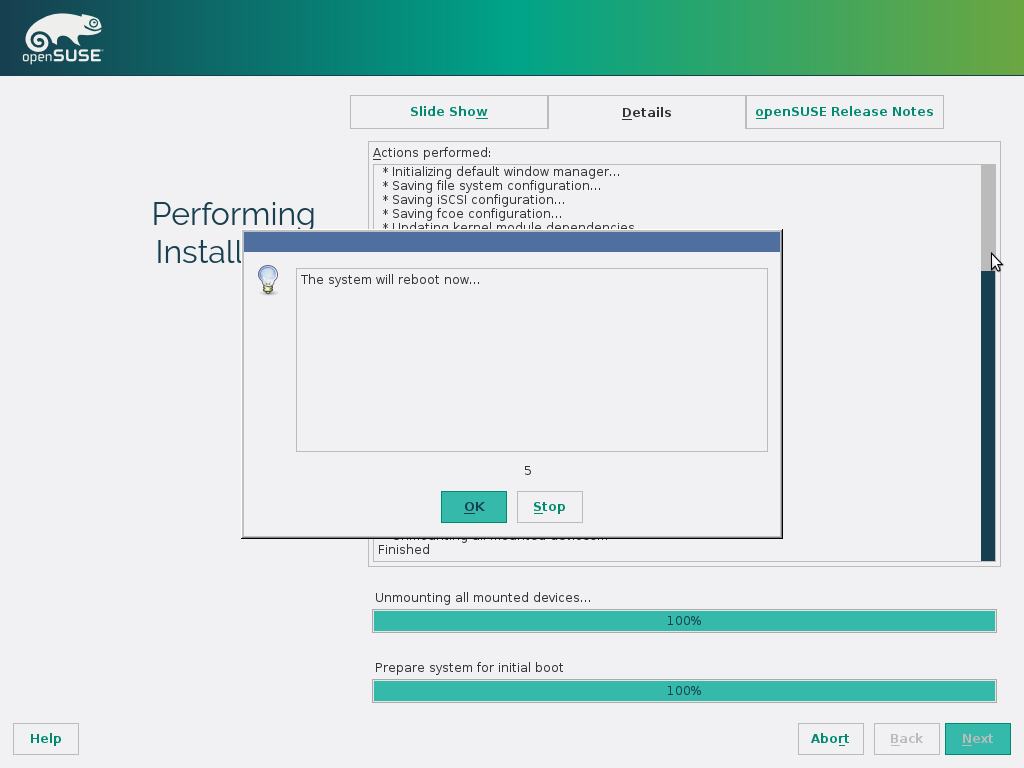 Still, the impression I’m getting after having used SuSE for a little bit this week is that the SuSE philosophy differs dramatically from mine on this point.

Right. There’s a spectrum of philosophy on configuration, and even Ubuntu vs. openSUSE doesn’t reach the ends; I’m sure I could find a review somewhere on the web that says Ubuntu’s installer has too many steps, and openSUSE’s isn’t flexible enough.

A lot of the openSUSE ethos is around choice and flexibility. To that end, openSUSE’s balance point goes for sane defaults but lots of opportunity to change. No one can objectively say that’s right or wrong, its different and subjective. Part of the core argument for trying it, though, is subjective, in that experienced Linux users were asked ;-).

Would I give my Mom an openSUSE laptop and say “go have fun”? My Mom, probably not. I’d send her a Chromebook. Your Mom, I dunno; that’s up to you. You? You’ll probably have a lot of fun, and find out there are some things you appreciate having a bit more control over. Or not.

I believe all the desktop choices on that list support Auto Login. In your case, Enlightenment isn’t on that list yet. Bryan was just making life hard on you ;).

Putting the final install choice of keyboard layout on the “accept EULA” page you must admit thats a bit random.

First off, its the first choice you make. You’re final choice is to actually modify the disk.

But more to the point, the layout changed in YaST a bit this version, in order to present a simpler interface: the traditional ‘table of contents’ was dropped, and larger titles added. Some of the layouts changed to accomodate - here’s a screenshot of the same pane in 13.1: 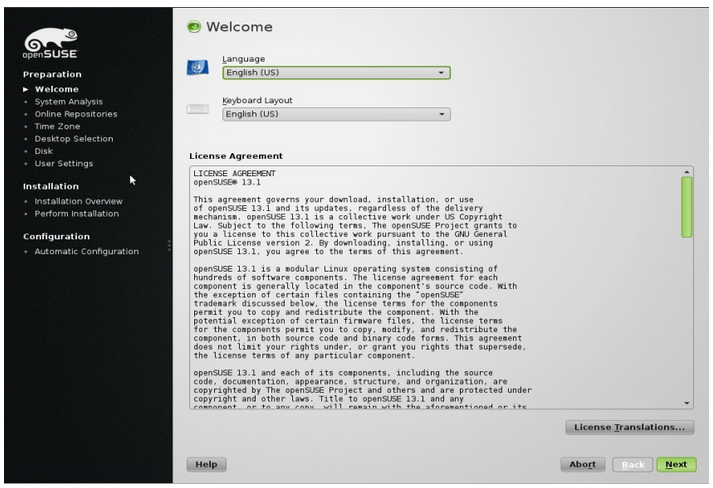 I think it makes sense to present this first, and I don’t find it random at all. I don’t see how you can ask for language & keyboard at any other place in the install, than the very start?

Yes, we should probably automatically switch the EULA. No one’s saying its ‘finished’ or ‘perfect’ or any such nonsense ;).