I know that the big BL (Lunduke) himself was playing with the Mixx2. I totally agree with what he’s after, the closest things I own are a Sony Vaio VGN-UX1XN (which is awesome running Mint XFCE, just not great battery) and my Asus Eee, which runs Arch and Kde, just wish it had a bit more grunt.

So, I get that the Mixx2 and Linux aren’t best friends at the moment, so was wondering if anyone has got a hybrid working well with Linux? I quite like the bright orange Lenovo Yoga 11, if anyone’s seen this running well?

I’ve gotten a version of Fedora kinda-sorta working on my Miix2. Just no WiFi. And power management is all wonky.

Adam, the RedHat/Fedora dude behind Fedlet, is doing a pretty killer job of keeping that image updated… but it’s got a few things left to do before we can really use it as the main system on these tablets.

Yeah, that is my current idea of portable Nirvana. Sure it’ll change soon as the Vaio UX was my last idea, but still.

I’ve had my Yoga running for a week with Windows (queue abuse from Jupiter Broadcasting), to see what might need fixing with Linux. The hardware is really, really nice. Very light but feels sturdy as an army Land Rover. I have a USB flash drive with Isis on, which runs like Usain Bolt. Goal is to get Open SUSE with Gnome running full time.

Very light but feels sturdy as an army Land Rover. I have a USB flash drive with Isis on, which runs like Usain Bolt. Goal is to get Open SUSE with Gnome running full time.

Everything in ‘laptop mode’ is fine, except the WiFi card. There seems to be a driver here https://github.com/lwfinger/rtl8723au, so I’ll try that at some point.

The touch screen works great, without any calibration. Obviously, the auto rotate doesn’t work with the accelerometer, nor the keyboard lock with the hinge potentiometer. These need Lenovo software running on Windows to work, so will have to look into getting the same on Linux. In the mean time, I’ll write a couple of scripts to do the same.

I’ve also not tried the graphics card, under load, on Linux. With the Intel driver, on Windows, it’s actually pretty impressive. Working with the i3, I can play most games I have on Steam, including HL2, Portal 2, CoD MW etc, hopefully the free driver has the same performance.

Even the keyboad lock on the hinge is now working! 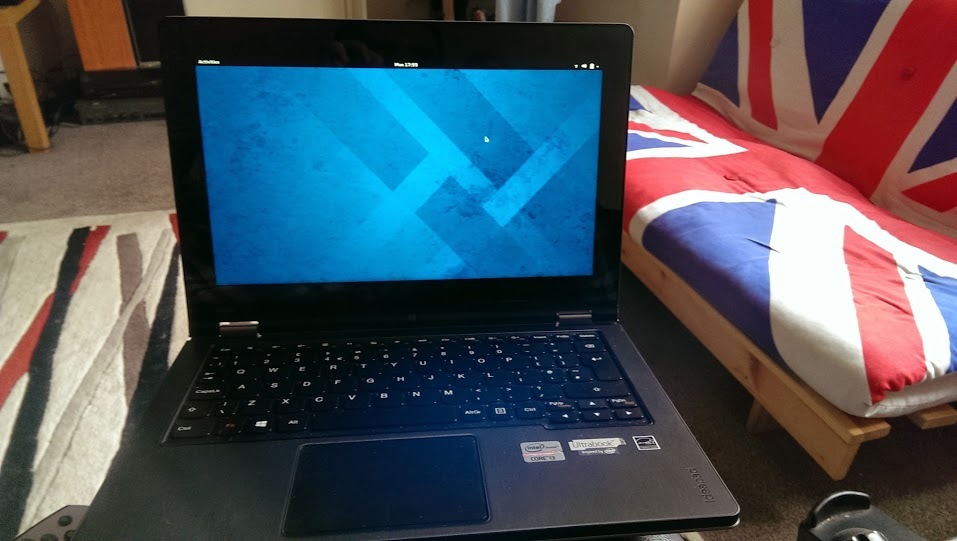 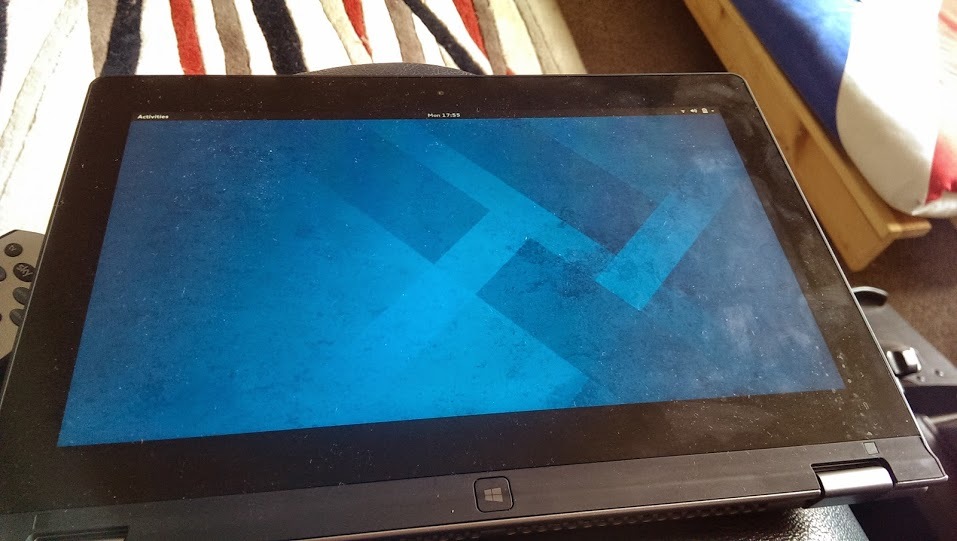 @Joe if it wasnt running Gnome 3 it would get a lot more grunt, over the years I’ve had plenty of time to play around with Linux what fly’s along are the barebone’s desktop’s like OpenBox, Hacked Box etc, see tiny-core-linux & arch-bang or crunchbang for examples.

Remarkably enough Window 3.1 used to be FREE until they discovered they could charge people $195.99 +VAT and then it of course became 32-bit instead of 16-bit and included nsa_key.dll

Sweet laptop BTW… Does it use UEFI? If so you might want to check out coreboot.org and git clone the lastest repo and remove the RSA signed key nastiness out of your CMOS.

UEFI-“Be gone for thou art Banished!” Gotta love INTEL and there Quote for the blob.matrix file…

“We expect the customer to send us the Private key for there signed Binary in .PEM format!”

Not to despair though the latest news out of the motherland is they’ve swapped over to Baikal ARM chips because they support there national operating system, which just happens to be “Linux!” so we can all look forwards to buying a laptop in the near future with the wording; “Made in the USSR!”

Great news for UK buisness because RISC in Cambridge manufacture the Chips, our new Comrades are willing to award 150 Million annually for the contract! Hurrah!

If your into duel boot setup’s check out FreeDOS and if you dig around you can still find Windows 3.1 which fit’s it like a glove… With some minor desktop adjustments you could even run Calmira!
http://www.calmira.net/

Nostalgia for nerd’s it’s like Windows 95 only vastly improved… Fly’s along on a Pentium 166 with 64 MB RAM.

No wonder Sony & Microsoft get so uptight, we’re not giving them the Raw data and we’re ruining the customer experiance for them… Ever heard of Chao’s theory, chao’s theory says that all those Analytics are actually Harmful… As I get older and turn more grey I find myself nodding at that sagely bit of advice! Advertisers & Marketers are as Bad as the Media they’re all Scum! It always seem’s to escape these people’s grasp that the word’s Developer & Hacker go hand in hand!

This device will predict the Future, fantastic marketing opertunities, we’ll all be rich beyond our wildest dreams… erm No, it’ll all go side-ways, you’ll all be found out to be nothing but craven and your market dominance will end and you’ll be forced to pay back all that money… Hence “Chaos theory!”

Goodbye Dell, Goodbye Intel, Goodbye Microsoft, it’s been a pleasure doing buisness with you all these years but developer’s have got to go where the money’s at and with people that respect there software freedoms and rights to privacy… “Privet Comrade, Smert Shpionam???” translation: “Hello buddy, death to spies???”