Has anyone used this yet. It appears to be another way for Google to get permission to delve even deeper into your personal information… What do y’all think?

Interested to try it. Given that it works on GMail, they already have my email anyway, this just seems to be a better way of managing it.

I’m with @jonobacon here; I’m already a gmail user, so I don’t feel that I’m significantly impacted by having Google provide me a different UI. Whether Inbox is actually better than gmail… is another question which I’m still undecided on, and I’m using both in parallel. It is wildly disappointing that web Inbox only works in Chrome; I am assured that that’s only temporary, but I’m still pretty unhappy that it was considered ready for release without that.

I’ll stick with Squeaky Mail. I totally dig its great support for PGP/mime.

Squeaky is a fork of K-9. It fully supports PGPKeyRing and PGP/Mime with it in addition.

This is an email client derived from the popular, open source application K-9 Mail. Squeaky Mail integrates with PGP KeyRing, a crypto provider, empowering you with safe and simple email encryption

You’re describing a single-platform Mail app. I might be annoyed that Google Inbox is only on android, ios, and Chrome, but at least it’s on every platform and not just Android. Otherwise I might as well just recommend iphone-only mail apps.

I don’t know what to think about it other than it’s different. GMail brings a lot of things to email like Google Wallet integration right in the email but then it’s all web. If you are targeting a business profession there is a good chance that he or she might be using a desktop client and that breaks everything. Most email clients don’t know how to deal with GMail’s label. Thunderbird or KMail would download each email twice or multiple times depending on how many labels it got. IMAP has no idea what GMail Categories are. I prefer desktop clients because I can downloaded in background and then I can quickly work on it when/if offline. I don’t want XMPP happening to IMAP too.

Been using it since Saturday (not got invites yet, but I simply sent request to Google and got invite a couple days later), and so far, I haven’t ditched it or felt like it’s the next great thing. The primary thing I find is it’s somewhat confusing, as basically what it does is try to organise your inbox for you, which may not necessarily be how you would like it organised! Then again, you can edit it to suit your needs and everyone will have a slightly different experience depending on how you already have your Gmail account set up.

I like the fact the interface (primarily web I referring to which ((works in Chromium)) ) focuses more on the content and previews thereof, I like that you can ‘bundle’ similar mails (isn’t this simply labels?) and choose how much to see or where they go. The idea of having reminders and ‘marked complete’ as features is something that should be useful (doesn’t seem to integrate with ‘tasks’ however)

What I’m not sure about is that I’m not going to end up missing emails that get syphoned off into bundles or marked ‘done/complete’ and just disappear from the inbox screen. This fear is yet to manifest, but I suspect it is more likely.

I haven’t really put the Android app through it’s paces (took quite a few goes to get the thing installed!) so will have to defer passing judgement there, however it seems to be exactly the same thing in a smaller screen afaict…

So far, a tentative ‘yay’ from me…I think Google need a ‘web app’ win as there have been far too many experiments that have failed from them over the years (Google Wave had real potential!)

basically what it does is try to organise your inbox for you, which may not necessarily be how you would like it organised!

I’ve been invited but it’s not yet available to Google Apps users, so I’m waiting, patiently.

But I have to say once I’m in I plan to let it do it’s thing for a bit (a week, maybe a month) and see if it turns out to really be that smart. Often times I think people (myself included) are too stubborn and insist on having things exactly the same as they’ve always done it.

It reminds me of the Murphy’s Law: Defaults were chosen for a reason, don’t touch them!

Just started using it tonight. We shall see…

I’ve had it for a bit. I use it on Android only as I’m on Ff for my laptop browser.
I like it enough but I think it needs a few more features to be useful to me -swipe to next email/conversation would be really useful to me and the lack of that feature keeps me on the gmail app -I get a feed of photos emailed to me and when I’m browsing those swiping is really handy.
I’ve played a bit with lables/bundles and like the idea. I do fear missing something important which may be a non-issue because I haven’t seen it happen yet.
It’s very ‘Mailbox’ which I really liked but gave up when I decided to give up dropbox. Mailbox felt more useful, but I can’t articulate exactly why so take that with a grain of salt.
I suspect that it’s best use is for people who have a crazy inbox and who haven’t invested any time into organizing it; my email organization, such as it is, works pretty well for me so I’m not super excited by it. I’m still open to using i more if they implement a few features and add Firefox support for when I’m not on mobile.

I got my invite last night, but this makes me so angry that I want to shit my brain out of my nose. 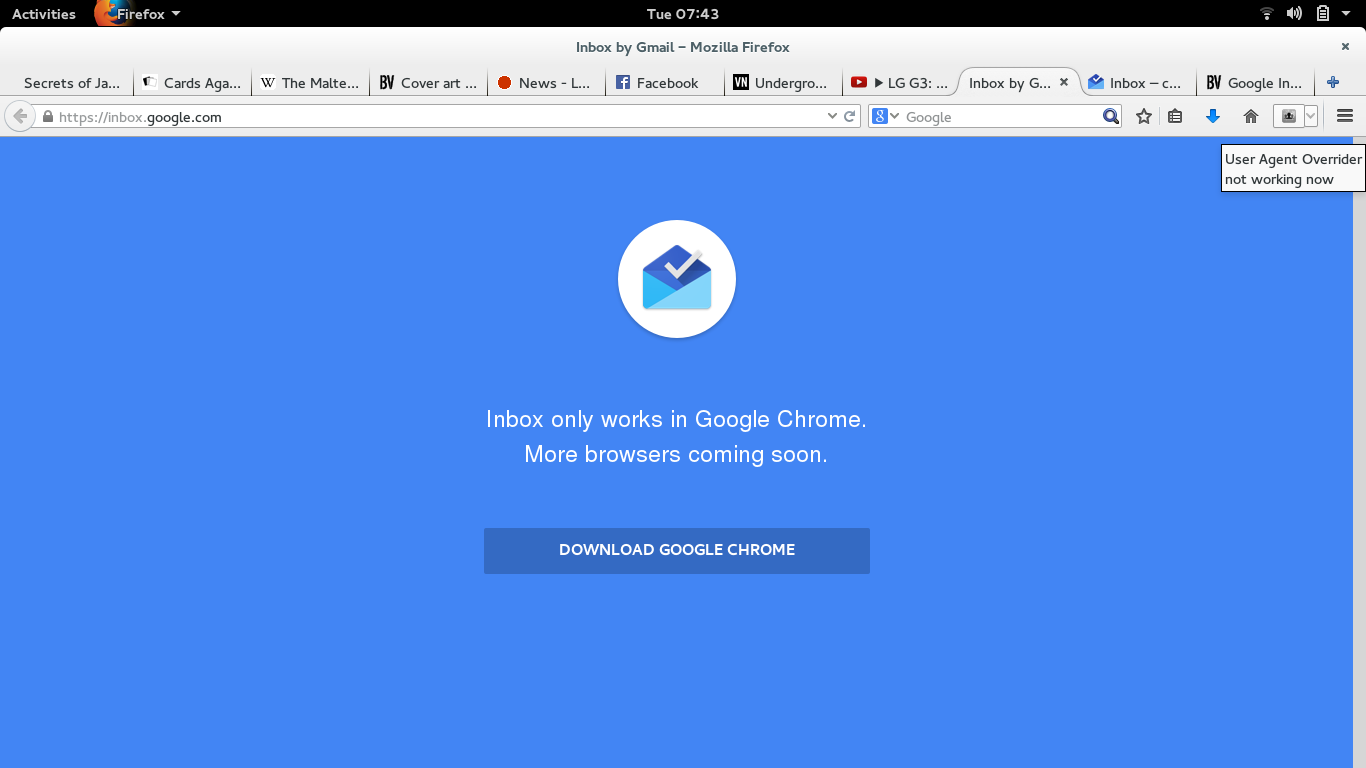 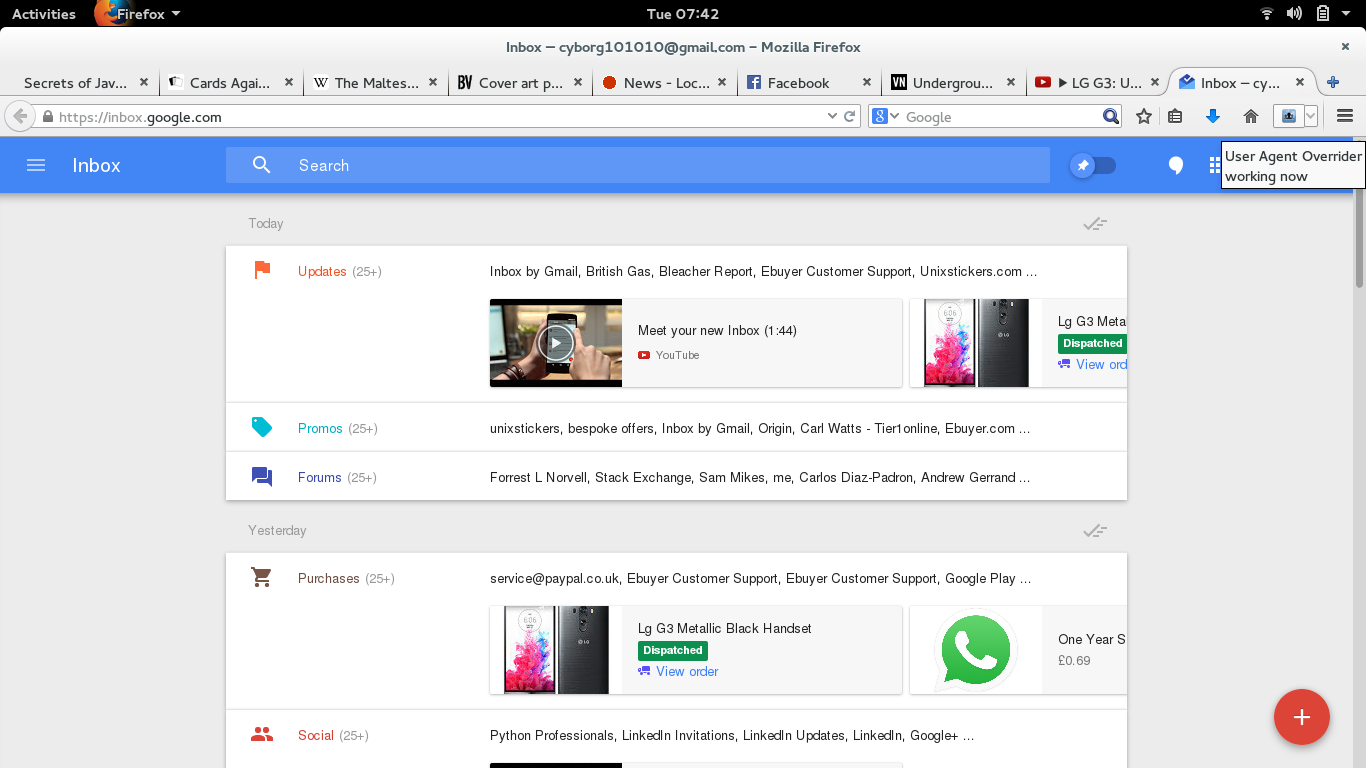 Agreed, and I have bollocked Chrome’s devrel team about it. Note that forcing your way through with Firefox is likely to cause you problems – the Google developers are smart enough to not block off other browsers out of evil, but because something doesn’t work.

Yes, I was expecting to find things that don’t work, although I haven’t yet. I shall report any findings.

Been running it today in Firefox without any issues. Looked at the JS console too, no errors.

I like change, even for the sake of change. But google inbox is for me shitty broken garbage. Its slower and jerky on my fruit flavored device with a V monicker. I get badges on the launcher but cant find the bloody message when i open the app. The colorful busy stretchy rubber band thing is what I watch more than reading email. About the only thing that is better than the gmail app is the attachments being accessible from the list view. Maybe they will backpprt that to gmail and continue the zerg spawning pool they call inbox intill they evolve a new fearure that isnt shit.

But google inbox is for me shitty broken garbage.

Interesting. I’ve found Inbox annoying on the desktop, but it’s not that bad on a mobile…?

Think im getting my head around things, liking it better now. The jerkiness problem was being caused by my wifes newsletter with like 30 jpeg attacments each. I really like how it doesnt give you number of unread email total like gmail app does.my brain is bothered bh the fact the badge tells me I have 44 unread emails. After some if the initial hand holding goes away things get cleaner too. Sorry for spewing venom after the first impression.

I’ve tried it and really don’t like it at all, It annoyed me that I needed to install inbox on a android phone because I didn’t have any google on my android…