Do you use a VPN?

Due to recent laws passed in the UK and USA, VPNs are starting to become necessary to preserve your privacy online.

What you do think? Do you trust out of the box VPN providers or do you run your own (or do you just not care)?

I’ll likely be adding it into the list of things my server does.

The legislation in the US is permissive, not compulsory. American consumers should hassle the fuck out of their ISPs to ensure they don’t implement data mining passthrough to third parties.

Here, the threat is to encryption. Again. Whenever an application which promotes end-to-end encryption is compromised, the marketplace generally provides an alternative, which everyone can and should switch to. However, the likelihood of vendors accommodating the UK’s threat of enabling government backdoors (setting aside the feasibility of such a feat without compromising the encryption in other ways) seems minimal, especially when those vendors are based overseas. Do you really think the population will wear someone like WhatsApp turning round and saying “because of the UK government’s stance on end-to-end encrypted messaging, we are blocking our service in the UK”? Because that’s more likely what will happen, at least with companies who have spines. If you find out your app’s vendor has folded and implemented backdoor access, you should move. Immediately.

With respect to VPNs, any service which does nothing more than encrypt your data between your phone jack and some endpoint somewhere on the Interwebs will likely be your best bet. Any service which advertises geoblocking workarounds and torrent privacy will likely be subject to some form of interference or legal hassles, jeopardising your service provision (oh, hi Netflix.

So yeah, I dunno

I have a Turris Omnia. I’d love to be able to set it up so all my traffic apart from iPlayer goes out through a VPN to a chosen provider. But I haven’t figured out how yet.

Yeah I agree! I’ve got my own running on a $5 a month VPS running openVPN and it’s been solid.

Following on from the point you were making - I do think there’ll come a time when websites will have to open up to allowing VPN connections. Netflix and Google (for example) make this difficult at present and the stance is “well, don’t use a VPN even if you’re using it for legitimate privacy reasons”. I’ve seen the Digital Economy Bill is about to be given Royal Ascent so ever more reason to run one IMO.

I have been using Private Internet Access for almost two years now. I think with the way things are going, it is a must have for anybody remotely concerned about privacy. It is surely not a fix all for everything but it is one crucial layer in security.

Nope, I’m in Canada…so for now I don’t. I have little game I play though that I call “startpage slots” where I click the “watch here” option in a video search, repeat and refresh if it doesn’t work the first time, and hope for a US user soon if I want to watch a saturday night live skit or something else not available to me online.

if I want to watch a saturday night live skit or something else not available to me online.

SNL clips are available outside the US on YouTube: https://youtube.com/user/SaturdayNightLive

They do, but limit the recent/official ones.I was looking for the Casey Affleck Dunkin Donuts (put up by someone else now :)) sketch a while back the week it had aired because my friend said I had to watch it as I got drunk and did the exact same thing out the french windows at my local when they brought in the smoking ban here. I play startpage slots every time I get “not available”.

Second year PIA user here, on Linux, Mac and mobile. PIA on Linux (Arch) got to be a bit of a pain to maintain, on Mac it works without issues, on mobile it’s a 50-50; mainly it struggles reinitializing data after WiFi to LTE switch. All in all, speeds have been good (mainly Left Coast U.S.) and will keep using it as my VPN.

I play startpage slots every time I get “not available”.

I have no idea what that means 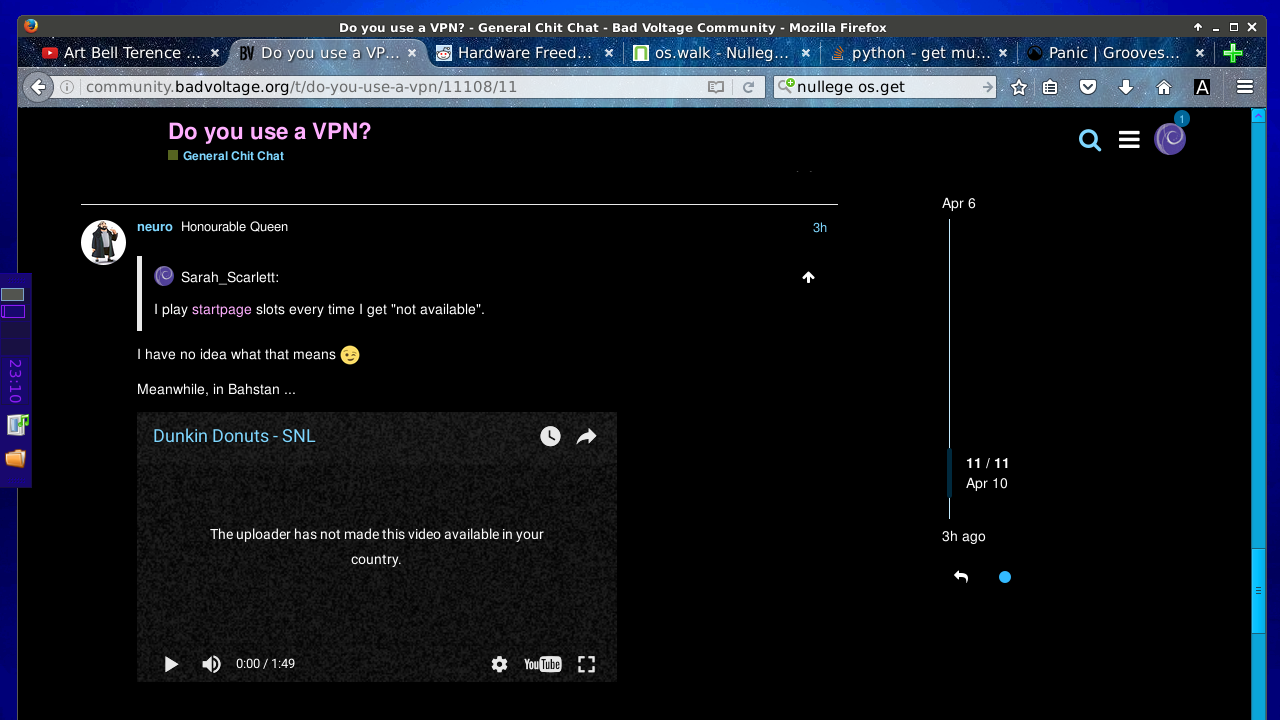 (p.s. I know my setup is beyond ugly, but I’m prone to migraines)

I’ve been thinking about it, but like @gerv I would like to be able to set all traffic except some to go through the VPN. I’ve got four kids, so between the kids and my wife and I we routinely have four concurrent video streams. Rather than pushing that through a VPN service or my own VPS, I’d like to designate Netflix, Amazon Prime video, and Youtube to bypass the VPN.

I haven’t figured out how, though.

You know, I just don’t care. Being a parent, my at-home browsing habits are so innocuous anyway I don’t really care whether the Government eavesdrops on them. My at-work browsing habits are (I assume) snooped on anyway - they’re certainly filtered cos I regularly can’t access useful things. And I’m pretty sure Google knows everything about me.

I’m aware enough to know that perhaps I should care, thin edge of the wedge and all that, but it all feels a bit tinfoil-hattish.

@gerv Saw this & thought of you.
hope it helps

What is that extention that turns the background black-like ?

back to business for a christmas present for my SO - I’m gonna go with the ord VPN and why not try it if you’re stuck (?)

That’s very sweet, the best gifts are the ones you use everyday and it shows you care

I’m barely even online anymore because I’m using all my free time at home obsessing over doing something in python (which is really slow going when you don’t know how to program :0)

The firefox extension is simply called “Dark Background and Light Text”. It’s a godsend for anyone with classic migraine (which is kinda like a cruel game of connect four of what in the world will finally be the last straw to trigger one). Dark background; That’s all it does but I love it

What even is everything, like the thing on the left side? And is that (the tabs and stuff) what Firefox used to look like, or is that specially themed for migraines?

About the migraine. Do you get a similar helpful effect when turning the brightness of the screen down?

About the VPN: my colleague set up a VPN on a spare laptop for when I go through the great firewall. I also used it in the USA, because I got a creepy overlay on webpages at a hotel. EDIT: So I do not know the details about my VPN setup, it’s just to avoid ending up on a blacklisted one halfway through my stays.

It’s just debian with xfce (the thing on the left is a movable workspaces/speed launcher/clocky thing that comes stock with xfce) . The only thing different is I added the dark background and light text and “Space Fantasy” background to firefox. As for the tabs: The always useful nullege.com and stack overflow !

GD I love both of those sites! I only ever lurk on both but they’ve been invaluable. Stack overflow has every question that could possibly be asked about programming answered (If I ever meet Brian Oakley I am so buying that man a beer!) and nullege is a search engine of python code (so you can look up how people have solved problems similar to the one you may be having). I’m not a programmer, I don’t want to be a programmer. I just want to make Free software. Anyone can (I think more people ‘who have no business coding’ should try coding) and those two sites do help immensely. Mind you, I wouldn’t call any of the stuff I’ve done ‘good’, but I think that’s another benefit of the GPL (anyone can pick it up if they see value in it). The other three are youtube, reddit and the now defunct groovesharks(I use rockraptor.com now and am currently on a Japanther binge).

About the migraine. Do you get a similar helpful effect when turning the brightness of the screen down?

Python seems very nice. I have not tried anything with it myself, but all the cool kids are doing it. And have been doing it. And have been doing it before then… It feels like Python is the lingua franca of the programming world. Everyone speaks the language!
Nice of you to want to make GPL software. Are you like deeply entrenched in the Debian community too? So you can use your connections to put your MakeEverythingBlack program into the new Debian? In seriousness though: it seems like there are lots of people who hobby help and are also big fans of the Debian project.

Thanks for the site tips! Rockraptor does not seem to work for me. It loads for a long time, and then the browser says that it cannot connect. I can’t listen to music now, but I will put the Japanther into a note

EDIT: about wanting to write free software: I once chatted on the net with someone who is really good at C and contributes to a media player. I asked him why he does all this charity work, and he said it’s because he is interested in media players. You just want to make Free software. I should make a topic to ask people why they write open source software in their spare time.