2x22: Known to be Carcinogenic

The “Toy Yoda” thing was actually an employer said whoever won a contest would win a Toyota, and worker busted their ass to get it done and then got that, if memory serves.

Yup; the description links to https://www.snopes.com/business/deals/hummer.asp which covers it in detail, which I found while writing the show notes

I listen to a podcast, you expect me to read?! Monster!

Lots of good stuff this show, though.

Re our contention that it should be possible for Google to provide an API for LastPass and things like it to put passwords into apps without using the accessibility APIs: http://android-developers.googleblog.com/2017/11/getting-your-android-app-ready-for.html seems to be a move in that direction…

One of the key reasons the internet was invented was to increase the possibility of sharing ideas. As an engineer, with an interest in pure science, I have never been happy with pay walls. I understand the need to keep certain information confidential, my company has its own NDA (Non Disclosure Agreement) but there is a clear distinction between pure science and business.

If I make a technical discovery then yes I should be able to patent the idea and have exclusive use of it for a limited time. But, without the “shoulders of giants” I have stood on I would not be where I am now. We need a reasonable time-frame to exploit our ideas so we benefit from them but if we don’t publish them eventually who’s shoulders will the next generation of engineers and scientist stand on (Original quote: Sir Issac Newton), since quoted by Stephen Hawking

Am I really the online person that does not like bitcoin because of the anti fiat currency people. Well I have known lots of pay phones in prisons and mental hospitals.

I’ve recently had the experience of shoulder surfing my partner’s 3 year old niece whilst watching youtube videos on her parent’s mobile device. It seemed like she got some kind of gratification watching a video for a few minutes (probably enough to register as a view, I’d guess?) then scrolling down and picking the most interesting looking thumbnail. Adverts are fully tolerated and even sometimes not skipped. The concerning thing I found was you start off with a bootleg legitimate Peppa Pig episode, and within about 5-10 minutes you’re stuck in this hellish loop of videos where adults are playing and unpacking toys and talking complete utter bollocks in kinda creepy voices, or the “auto-generated” videos. Once you’re in that hell you the recommendations get weirder and weirder.

Her parents aren’t computer savvy enough for enforcing parental controls (thinking screen pinning, and youtube’s “safety” features). I flipped them on and unsurprisingly many of the videos kept showing up.

The few I’ve seen I’m not entirely sure they’ve been auto-generated. Maybe created by someone who doesnt speak the native language, doesnt have kids, and works in sweat shop environments for someone trying to game the YouTube recommendation and monetisation system by exploiting the behaviour that young children seem to have for video hopping.

[…] within about 5-10 minutes you’re stuck in this hellish loop of videos where adults are playing and unpacking toys and talking complete utter bollocks in kinda creepy voices, or the “auto-generated” videos. Once you’re in that hell you the recommendations get weirder and weirder.

This is exactly what the Medium article linked to is about.

Something is wrong on the internet

I’m James Bridle. I’m a writer and artist concerned with technology and culture. I usually write on my own blog, but frankly I don’t want…

AOL making all that money on dial-up. I can’t remember where I heard it, but apparently almost all of it comes from Point Of Sale terminals. I expect those newsagents that want to accept Visa will probably end up going Square + Cheap Android + GiffGaff before too long.

Disclosure: I work for Mozilla, but not on Extensions, or Quantum.

When the addons API first came about, it was really just a very thin veneer on top of the implementation details of XUL and the internals Firefox. This made it large and extremely powerful, but also made the add-ons API — and thus the add-ons themselves — a massive attack surface for the whole browser. More importantly, it became a huge drag on changing the internals: whether to [move to a multi-process model, optimize Gecko or update the UI.

The change was quite a bit about standardizing the extensions model, but mostly — I think — about giving the Firefox team head room for increasingly ambitious optimizations.

The new WebExtensions API is sane, and largely Chrome compatible. More APIs are being added — the teams are soliciting for APIs to expose — but in a considered manner designed not to back the browser into a corner in the future.

I’ve just typed all this in and found an excellent Hacker News post from someone far cleverer than I am on exactly this subject.

Just listened to your Bitcoin/Bitcoin Cash discussion and wow!

… I think Jeremy gets it.

Please get someone to explain basics of blockchain and cryptocurrency to You and your listeners, I’d suggest contacting Andreas Antonopoulos - he is real good at keeping it ELI5; or at least do a browse thru his lectures an Q&A on YouTube …

3 things regarding Firefox on Linux:

I always used Chrome but I tried Firefox recently because of all the hype around it, and I am liking it! It feels snappy, except for the horrid smooth scrolling option enabled by default. Does anyone here use that? 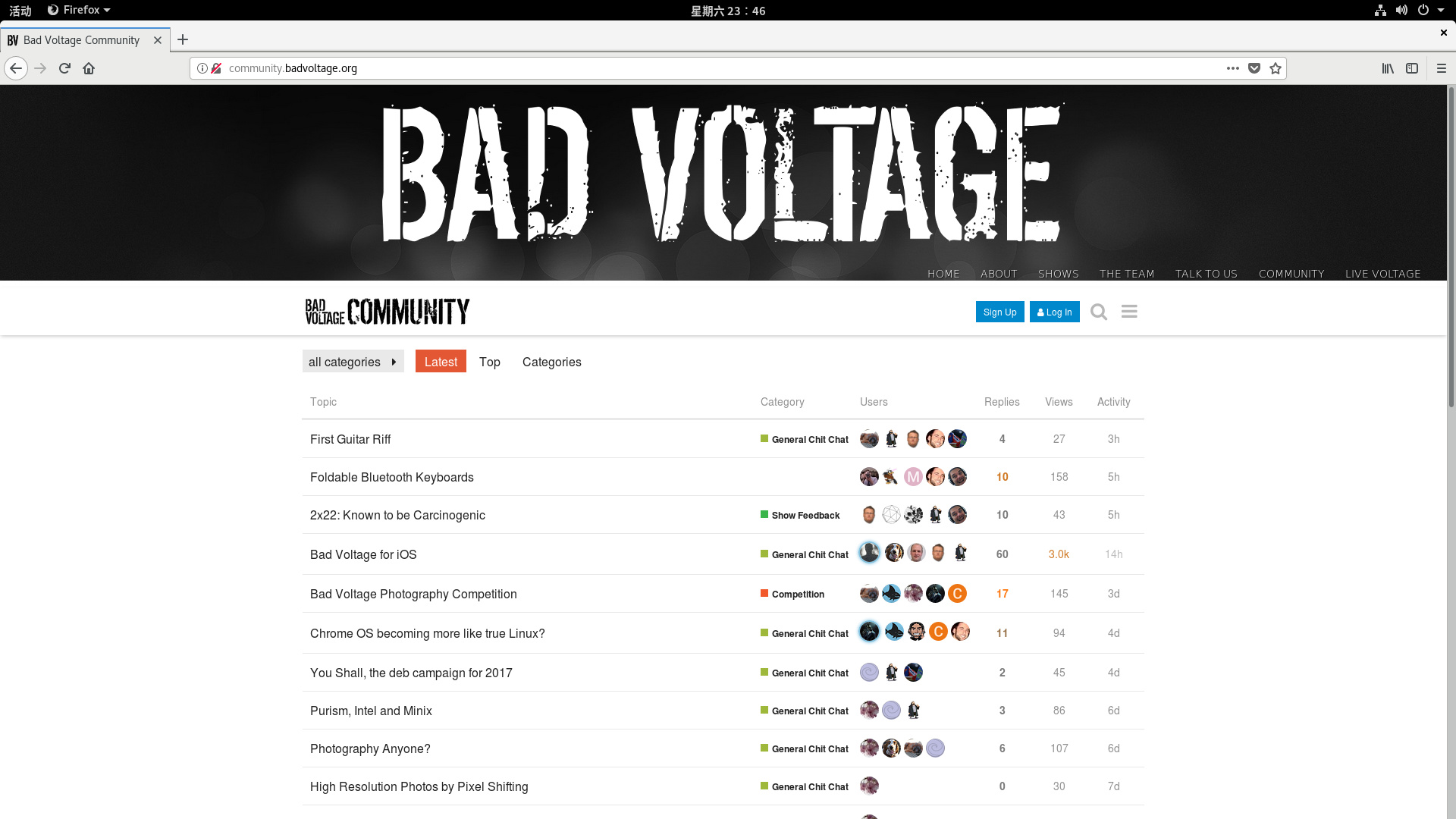 Likely correct, indeed, at least on my part

I don’t actually have much of a reason to learn, though, so far…

should I not be using the remote template then ?

Likely correct, indeed, at least on my part

I don’t actually have much of a reason to learn, though, so far…

Well, you should learn - at least about blockchain … unfortunately it will be everywhere

Well, you should learn - at least about blockchain … unfortunately it will be everywhere

Exactly precisely the reason I haven’t learned is that I’m not at all convinced of that. I think either Jono or I said in the show that it seems like it might be a fad, and I still kinda think that. (Not sure of that, certainly.) And Jeremy mentioned how crazy volatile it all is…

blockchain as a concept most definitely is a fad, but when the tech gets deployed and used in corporate world it will be there “forever” - we will not be able to get rid of it; it will be the COBOL of this generation …

The mentioned volatility is in regards to Bitcoin, the crypto-currency. They are tightly linked but many (like IBM & Microsoft) think that you don’t need currency for the tech to work.

Hyperledger is a good place to start, if you’re interested in what the business community is doing with Blockchain and distributed ledger technologies outside of crypto currencies.

I like an occasional news episode for a change.

Agree, enjoy episodes that mix it up and try new formats, keeps it fresh.

5 Likes
next page →
Please respect our code of conduct which is simple: don't be a dick.