In this episode, we devote the whole show to a different format: a wide-ranging discussion on Linux adoption and market share, following the news that it's been trending up and over 2% consistently for a while now. Taking in the current state of hardware, Steam gaming, new devices from everyone else, and whether mobile is eating desktop or not, Stuart Langridge, Jeremy Garcia, Bryan Lunduke and Jono Bacon dive deep into where Linux is going and whether we want it to get there at all.

I never noticed the humming noise before. Now I can’t stop hearing it…

@dankles I have bollocked @sil endlessly about the hum on his mic. Hopefully it will be resolved for the next show.

@TheGuyWhoLovesChill you see how it says “suggestions”? That means: people come up with ideas, and I add them to the list for us to think about. We had already planned this show, 1x80 – we don’t just show up five seconds in advance and think shit up, shows are planned way before recording day – and I have considered adding a discussion about fake news sites to a future show if we think there’s enough in it. That is, however, a far cry from me getting moaned at because we didn’t include a suggestion. If you want to decide what’s in a show, feel free to do your own show.

@dankles Thank you for the pointer. We were at a loss for who to have executed this week until this, but now Jono has beaten Stuart to death in rage at his utter incompetence at audio things. Stuart’s surviving family would like to point out in his defence that he is genuinely sorry and was hoping to spend some time this weekend fixing it. You know a situation is bad when not only does Jono bollock you for it but Jeremy gets in on the act too. Apologies.

You know a situation is bad when not only does Jono bollock you for it but Jeremy gets in on the act too.

I do believe the message has been received.

While some of this show was kind of a rehash, a lot of it was of perspectives that was a bit new for me. I enjoyed it! Thanks.

I thought the hum was HAL 9000 preparing to sing Daisy.

Cleverest thing said in the conversation was said by Jeremy:

“We’ll turn that into a segment”

This will give everyone time to think. Think about what Free software (and a part of that, of course, GNU/Linux) does for people. It’s easy to take for granted when it’s been a part of your personal culture for years; It’s also easy to assume everyone is just like you. This is not a criticism, I’m just pointing out common errs of human nature

I took a selfie at work last night. 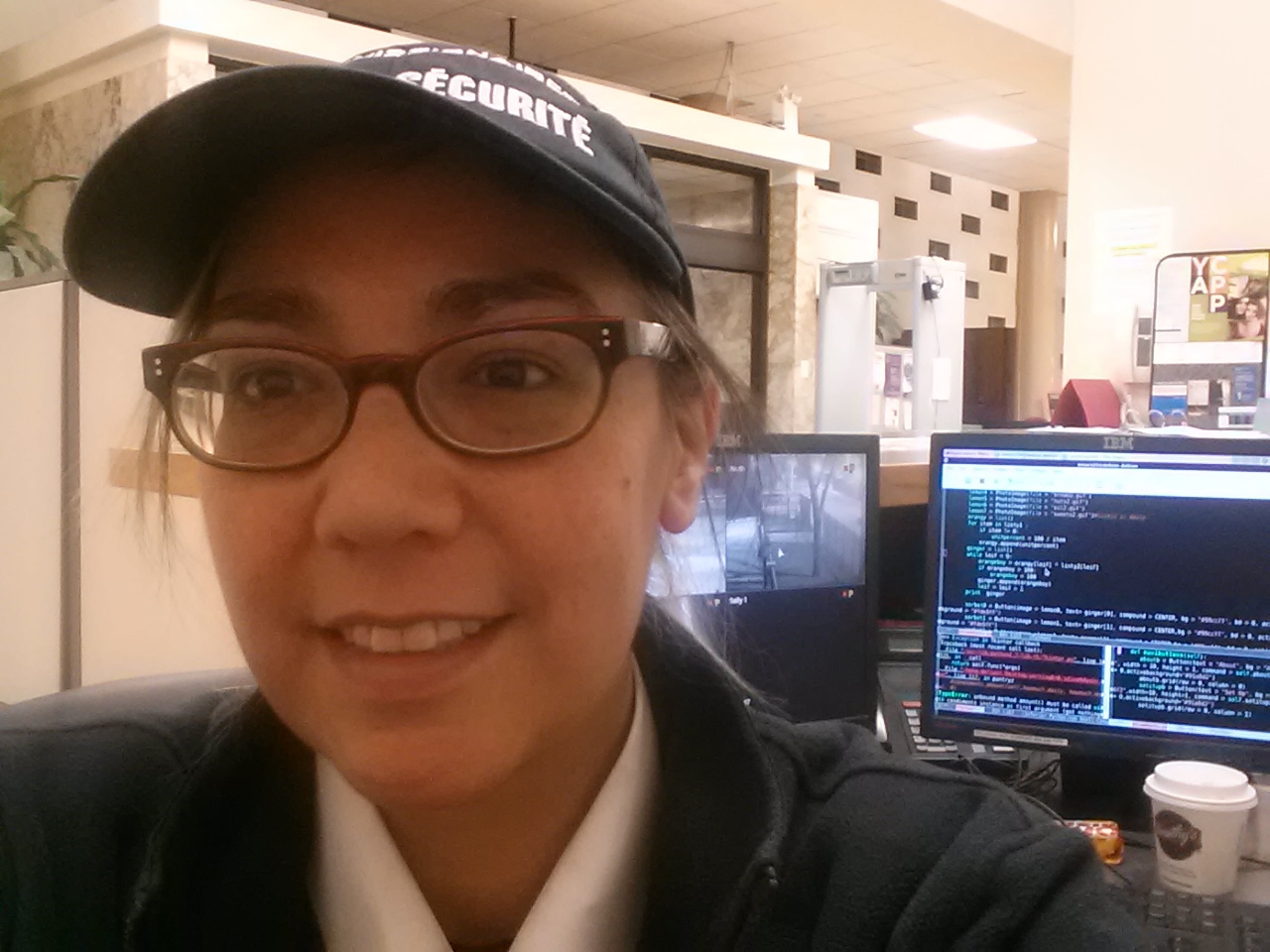 I graduated a shitty college with an even shittier paralegal diploma and I have what could be considered a shitty job. I’ve never wanted a career in IT/CS nor do I. So why on earth can you see emacs running behind me on the monitor I’ve commandeered for debian on my shitty lappy?

Because I believe more software should be written with the motivation to GPL it and simply that someone wants it; Not so the author can try and become the next Sergey Brin. Even though I don’t personally have a usage for most of it, I appreciate the vast amount of programs that are in the repositories that were obviously written simply because somebody…somebody (not hundreds of thousands of people willing to pay xyz based on market analysis)wanted it. Somebody loved that program while writing it too:) I can almost guarantee you that as I type this there is someone else in the world writing python code with love in their heart.

To be candid, there really is no definitive standard to understand why people run Free software and GNU/Linux. Sure, you know why from the people who join communities…but those are just the people willing to join communities. I could rant (HA HA! And boy have I long one! ;)) about social meritocracies, social enforcement of monoculture, etc. etc. but that’s not what I want to do in this post. I do have to point out that the Bad Voltage community is pretty awesome and doesn’t suffer any of those hostilities though

For me…and I exist.

I guess that’s my point.
Everyone has their own reasons and that’s O.K. :)…but Freedom sure worked on me!

@dankles I have bollocked @sil endlessly about the hum on his mic. Hopefully it will be resolved for the next show.

(I think I have a nervous twitch now)

Crumbs, @sil sorry if I rubbed you up the wrong way.

You did. But, apology accepted; thank you.

I am not sure why I should be reading it?

… and Linux is going away from Android, too…

in which it seemed to imply there is a point in the future at which Android won’t be based on the Linux kernel. This sounds sad and unfortunate and makes me dislike Google a little more, but can you link us to a source for this? It’s the first I’ve heard of it and it’s very interesting.

http://www.androidpolice.com/2016/08/12/google-developing-new-fuchsia-os-also-likes-making-new-words/ has some details; it’s not clear what Fuchsia is for, but “it’s a new kernel for Android devices” has to be at least somewhere on the list, if not at the top

I am not sure why I should be reading it?

Actually, your co-presenters also need to read it. Your mathematics (sic) were spot on, it was just your logic that was bobbins.

Enjoying the show. Was browsing while listening when I came across an interesting study - across the OECD around 5% of users are ‘good’ with computers - the rest vary from doing most simple things to unable to use a computer at all. I think I’d be right to say that a good portion of Linux users will be in this top 5% since installing Linux definitely counts as a Level 3 task by the criteria of the study. So, can’t we claim 40 percent of string computer users use Linux? https://www.nngroup.com/articles/computer-skill-levels/