Jeremy Garcia, Jono Bacon, Bryan Lunduke, and Stuart Langridge present Bad Voltage, in which we argue about whether to wear socks, loads of festivals are interested in our technology, and:

Also, we're going to take questions. Send us a question you want to ask the team to [email protected]; it might be about something we've discussed on this show, or about anything else you want, and we'll choose the best question and answer it in each show!

See details of Bad Voltage Live, in Fulda, Germany on September 30th 2015, at badvoltage.org/live, and go get your tickets to see the show! 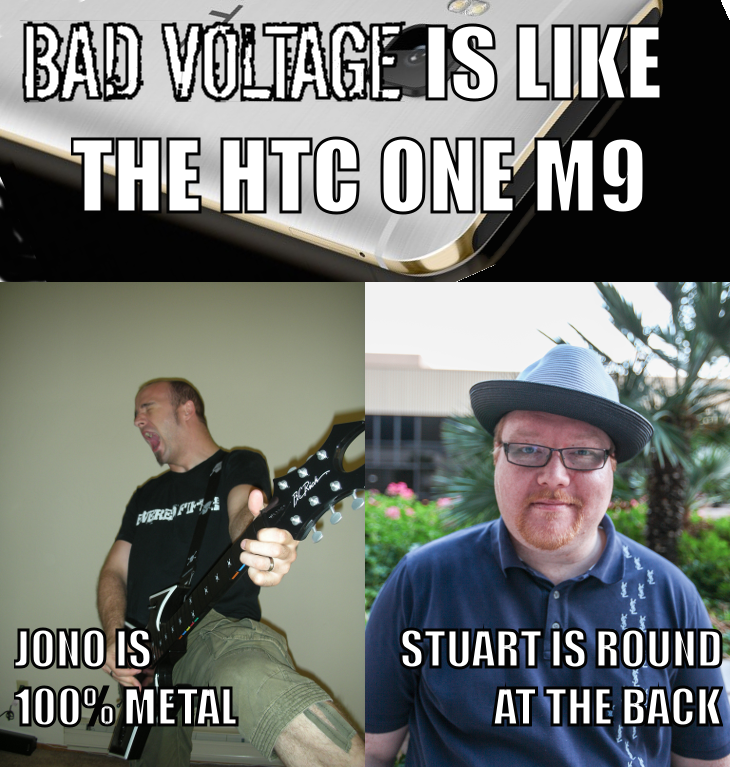 I had an idea about surveillance. It would, no doubt, be abused, but, I think, the idea is sound.

Why not have the facial recognition software ignore and dismiss negatives? Instead of the camera seeing me and saying ‘That is Greg’ making a positive identification for every face it sees, have it see me, compare it to the list of known suspects, and, when it sees that it is negative (for I am an unknown suspect

), and as soon as a negative is established, no further recognition is pursued.

Again, I don’t have any reason to trust that a government would do it this way. But it is an idea.

have it see me, compare it to the list of known suspects, and, when it sees that it is negative, and as soon as a negative is established, no further recognition is pursued

As I understand it, that’s precisely what’s happening at the Download festival. Other facial recognition schemes may be different, though.

The way government facial recognition use is portrayed, that they try to put an identification on every face. I have no idea if that is true.

I think Jeremy was right on Swift. Apps like Uber are 100% server controlled, they have a small shim app that downloads content to display from the Uber API so that changes can be pushed without re-submitting to the app store.

This especially makes sense when you consider that Apple is running their extremely valuable web services (iTunes, iCloud, and the App Store!) on Web Objects, something which has been outdated for years.

They need a new, popular platform to build web services on. Not just for 3rd party developers, but for themselves.

Found this tutorial about swift for anyone considering it.
Also- how long before we’re at this stage with facial recognition ?

For what it is worth Samsung seems to have made similar choices around battery life as well. In the interest of getting all the features they wanted in while making it a smaller phone they put a smaller battery in the S6 than they had in the S4 or S5. Combine that with some of the power management issues in Lollipop and there goes your ability to use your phone for a full day.

For what it is worth Samsung seems to have made similar choices around battery life as well. In the interest of getting all the features they wanted in while making it a smaller phone they put a smaller battery in the S6 than they had in the S4 or S5. Combine that with some of the power management issues in Lollipop and there goes your ability to use your phone for a full day.

I really end up using webkit as a consumer with qupzilla which is a nice browser I think more people should support. I don’t think I will learn swift but will be more into python or C++ or other stuff with Qt

I’m having the same thing this week. Everywhere I turn I’m thwarted by my lack of battery. Becoming a real nuisance.

00:02:00 The Register recently revealed that the Download music festival will have automatic facial recognition cameras. In Bad Voltage Fixes The Fucking World we discuss the problem of mass surveillance and how to fix it

EFF is about to hit their 25 year anniversary. This is an area they have expertise in. Any chance of getting them on a future show to discuss their work in this area?

It’s a good thing the phone is so small and light weight. It leaves room for me to carry a giant battery in my pocket for charging

If Swift means I can build a complete, releasable app for for iOS on Linux then I’ll be all over it.

I work for FastMail. We have hybrid apps for Android and iOS (that is, apps that embed a webview and expose certain native features to the Javascript environment, which get detected and used by our regular mobile webapp.

I use Linux - its all I’ve ever known. I’m employed primarily to do operations, but I did our Android app because I use Android and it was interesting to me, and because the devtools are available for Linux I can mess with it from the couch in the evenings.

The iOS app was done by our main UX guy, who happens to be a Mac user. He did just enough to make it work, but doesn’t have the time or interest to push it much further. I am interested, but I can’t work on it from the couch. I have test devices available and they’re easy to bring home. Bringing a whole Macbook home that doesn’t have my normal tools and environment available; that’s just a bit too much effort for stuff I mostly do on my own time.

As a result, the Android app is pretty good and getting lots of new features all the time. The iOS app meanwhile languishes. It works, but it doesn’t have all the nice platform hooks you might like (eg sharing from other apps).

I wanted to work on an app for another platform in my spare time, mostly to test some architectural choices to make sure they work across all platforms. Based on devices we had in the office, I could choose Windows Phone or Blackberry. I chose Blackberry because it has development tools for Linux. At the time Windows Phone did not, though that might have changed with VS Code. Yes, I built a Blackberry app by choice (its actually really pleasant to program for).

If if turns out that Swift can build real apps for iOS from Linux, then I will be very quick to port the Objective-C parts of our app to Swift and its going to get a lot of features pretty quickly. That’s going to make our customers happy. Many of them are Mac users. That can’t be bad for Apple.

(I don’t even care about the open-source bit here; just the availability of cross-platform tools).

Maybe part of this is Apple acknowledging that restricting development for their mobile devices to users of their desktop devices is actually limiting the number of apps for their platform? I can’t imagine its a huge concern, but what does this lose them, really. Worst case, only the Mac users write apps for iOS and everything stays as it was.

The whole point of CCTV is to know “what happened”. I think these facial recognition systems are a way of adding “who was involved” to the CCTV recordings. IF that’s all it get’s used for then I have no issue with it since the UK government/police/whoever already know who we are because of the UK state system, and they already know what I look like for my passport and driving licence.

Facial recognition systems are just a means of linking already incumbent systems together. We already have CCTV (and in the UK at least a crap-ton of CCTV). And when a crime happens the current means of identifying the victim and perpetrators of the crime is something that has to be done by the individuals who are investigating the crime. What the facial recognition SHOULD be used for is to make identifying both victims and perpetrators of crime quicker.

Of course there’s no guarantees that this is how it’s going to be used, and of course there’s a concern about data retention… If I didn’t commit a crime and I was no where near the crime when it occurred, and very obviously had nothing to do with the incident in question then there’s no reason to keep the data. But I don’t believe the recognition data will be kept, the same way that not all CCTV recordings are kept, simply because storing this information costs money.

Really I think the bigger problem here is that the organizers of Download weren’t going to reveal the fact that this type of surveillance was going to happen. I believe that to be a much bigger issue that the surveillance itself. Every time I’m in a public place I pretty much assume that I’m being watched (again comes back to the crap-ton of CCTV we have in the UK), but that’s expectation is based on the information that is already available in the public domain, and the fact that in quite a lot of places there’s a notice explicitly saying CCTV in operation. Would there have been less of an outcry about this if the fact that there was going to be facial recognition in operation was publicly advertised? If the signs not only said CCTV in operation, but actually said CCTV with Facial Recognition in operation (or some such thing)?

The way government facial recognition use is portrayed, that they try to put an identification on every face. I have no idea if that is true.

The UK has more CCTV than just about anywhere else and more and more of it is being linked to facial recognition software.

I was at a march in London recently, If you don’t know which one I’m talking about search #EndAusterityNow on twitter. Point being I saw one police officer with a tablet showing a number of faces including mine with names.

I should stress here I am well known for protesting in the UK but have never had a criminal record. I’m assuming this was based on facial recognition software as the pictures and names were changing on a regular basis.

@sil In the UK you can get hold of any video footage the authorities have you.

Who’s idea was civil war by the way?

I think one of the main reasons for Open Sourcing Swift is the education sector. I don’t think Apple cares much that podcasts that are popular in the Linux community are discussing it, but there are lots of CS professors and school teachers that have been saying “I like this Swift language, but I can’t teach a proprietary language as a start to computing”.

I don’t know much about Swift at all, but I’m sure that Apple is convinced themselves that the language is well structured, nicely thought through and easy to learn. In other words ideal for learning programming. If classroom after classroom learns how to program stuff for iPhones (albeit simulated on the school’s computer), quite a few of them will think twice before buying an Android phone.

Ah, a conspiracy is afoot! I like me a good conspiracy.

Huh. Invent a good language for education; teachers start using it to teach programming; students grow up being good at Swift and therefore able to write apps for Apple platforms and not for any others. That’s some pretty smart long-term thinking, if it’s the case.