http://www.emerge-open.com/index.php/component/content/article/44-services/140-support1 may be interesting here; I didn’t know about Emerge Open, but it seems like they want to provide the service we’re talking about.

Close enough! Though its rather enterprise focused - cant blame them, it’s where the business is.

I’m curious if they are doing all the development themselves, or if they have some contact with existing developers of the projects they support .

Would be good if they could branch out by making contacts with other popular projects (a few active devs in each project may be enough), then they can handle the customer, basic triage - then forward the issues to the active developers to quote on.

Edit: would be great to try and get these guys on the show.

If I’m not mistaken, we meet also elsewhere

Another point of view on the very same core issues you listed is that openSUSE requires the user to learn about it.

I never faced your points 3 4 5, because I use VLC for media playing and open driver for my pretty old GPU.

As you wrote, there are some aspects that need settings while on other distros they are defaults.

However, while being my observing horizon by far shorter than yours, some improvements happen from release to release: I gave up the first time I installed openSUSE 12.2 because of networking not working - later on I discoverd that it was not enabled by default - today networking is working out of the box.

As another example of improvements, font rendering: on Tumbleweed there’s a nice new package, yast2-fonts, that eases the systemwide font rendering configuration, I guess it will be added in the next release.

The real openSUSE problem IMHO is that it is a hidden gem: there’s very limited media coverage, so it is hard to enlarge the user base which drives to reduce the number of prospect devs, and this results in your list of required improvements.

Hi there @gabriel_3, good to hear from you!

Well, since I posted these points in the mailing list (#6 is new), I’ve continued to use openSUSE on all my systems, and I’ve also switched several other very new Linux users to it. Unfortunately in my experience, these points continue to be a pretty major roadblock to adoption of openSUSE by users that are newer to Linux or impatient. I appreciate openSUSE for the flexibility that it offers me, but I’m not a typical user. I think we all need to take a look at what we do to make openSUSE work the way we want it to, and then ask ourselves if others will be able to figure it out with relative ease. Most of us already know the idiosyncrasies of openSUSE, but I really think that new users shouldn’t have to:

The real openSUSE problem IMHO is that it is a hidden gem:

I’d definitely agree with this. But I don’t think it’s going to make news until it becomes more approachable for new users. Unfortunately it looks like a super easy to use distro, but then after installing the user has to learn a lot of little openSUSE “tricks” to make things work the way he wants it to. I don’t mind learning these “tricks”, but pretty much everybody else does mind.

Possibly I’m an unusual user too: I like the process of making openSUSE up as I like it. And obviously the more I use it the easier it is.

Maybe an external tool like Fedy for Fedora could help, or better a two mode yast, one with basic settings and one with advanced ones.

So why not use Antegros or Manjaro?

As a general rule I avoid derivative distros. Too many downstream projects (not just distros) have slammed into a concrete wall when the upstream made some incompatible decision (either technological or political). So I figure why take the risk, if Arch is what I want then I’ll use Arch.

remember that Bad Voltage is about technology generally

I thought it was all about @bryanlunduke. The description of the show should be something to the effect that ‘Bryan Lunduke and some blokes talk about things.’ Or, ‘Bryan and his entourage talks tech.’

Dammit @sil, I spent all weekend trying to find a way to respond to you that doesn’t violate the ‘DBAD’ rule here, but I can’t. Because, well, you were being a dick first.

I thought it was all about @bryanlunduke. The description of the show should be something to the effect that ‘Bryan Lunduke and some blokes talk about things.’ Or, ‘Bryan and his entourage talks tech.’

This is true. This is all true.

Dammit @sil, I spent all weekend trying to find a way to respond to you that doesn’t violate the ‘DBAD’ rule here, but I can’t. Because, well, you were being a dick first.

@bear454 has a point! I think somebody owes somebody an apology.

Ah. We may be talking about different things here. I said, on the show, at ~48.25, “people told me lies about what the wiki page said”, which wasn’t in reference to the version of Enlightenment: it was about 1x37: Spooning with Everybody in which you said

1x37: Spooning with Everybody

https://en.opensuse.org/Portal:Enlightenment includes one-click installs for both E17 and E19. Have a lot of fun!

which as far as I can tell it does not, and I said so and then spent about an hour thinking that maybe I was missing something obvious, trying it from an openSUSE browser, and tearing my hair out.

However, that’s not the point. I was a dick, there; you are right, I should not have accused you of lying; I was misled, and what you said was mistaken, but it wasn’t done with intent to mislead, and I was wrong to describe it as lying. My apologies.

I sense a snuggle party in our near future.

So, I just constructed this beautiful post, explaining exactly how everything @sil said about Enlightenment on openSUSE was wrong, and, at the tail end, found out where he was right.

First off, @sil was totally right to use the net installer; unless you’re passing out DVDs, its usually a better choice. If you’re installing KDE and/or GNOME, the DVD will do a faster install, since it uses images instead of individual packages, but for everything else, you’re probably downloading stuff you don’t need (See https://en.opensuse.org/Media_layout). 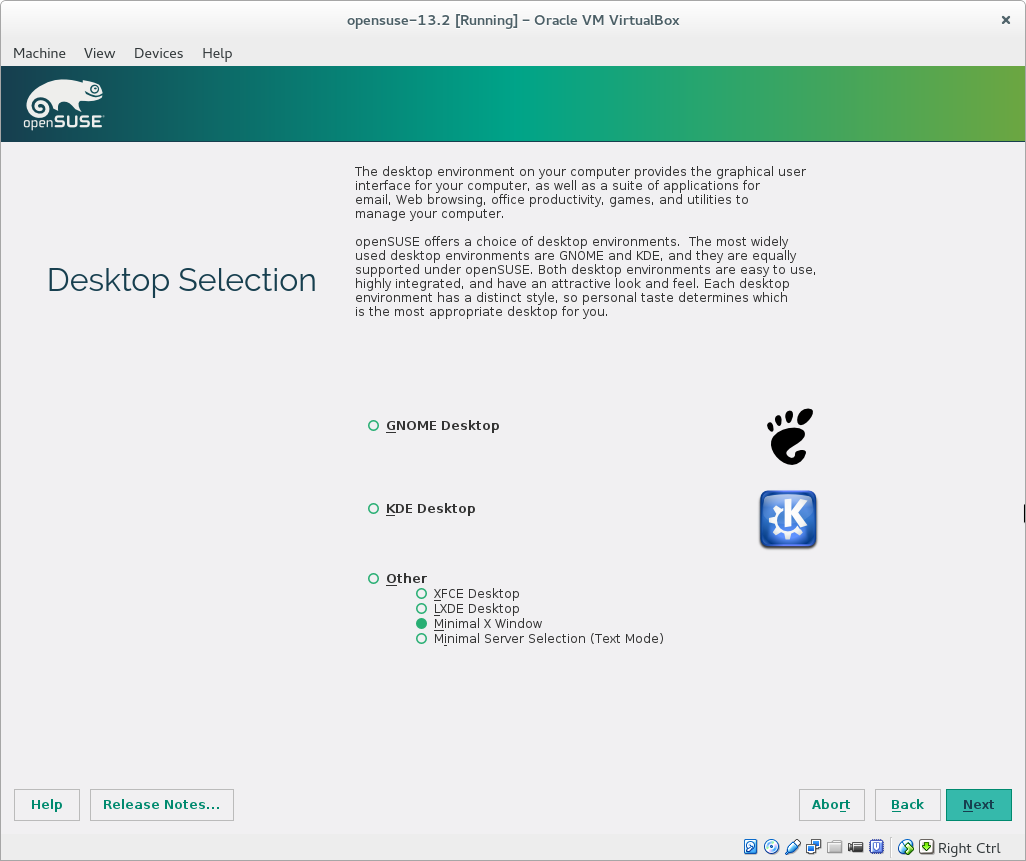 With updates included, or via the Net installer, it is: 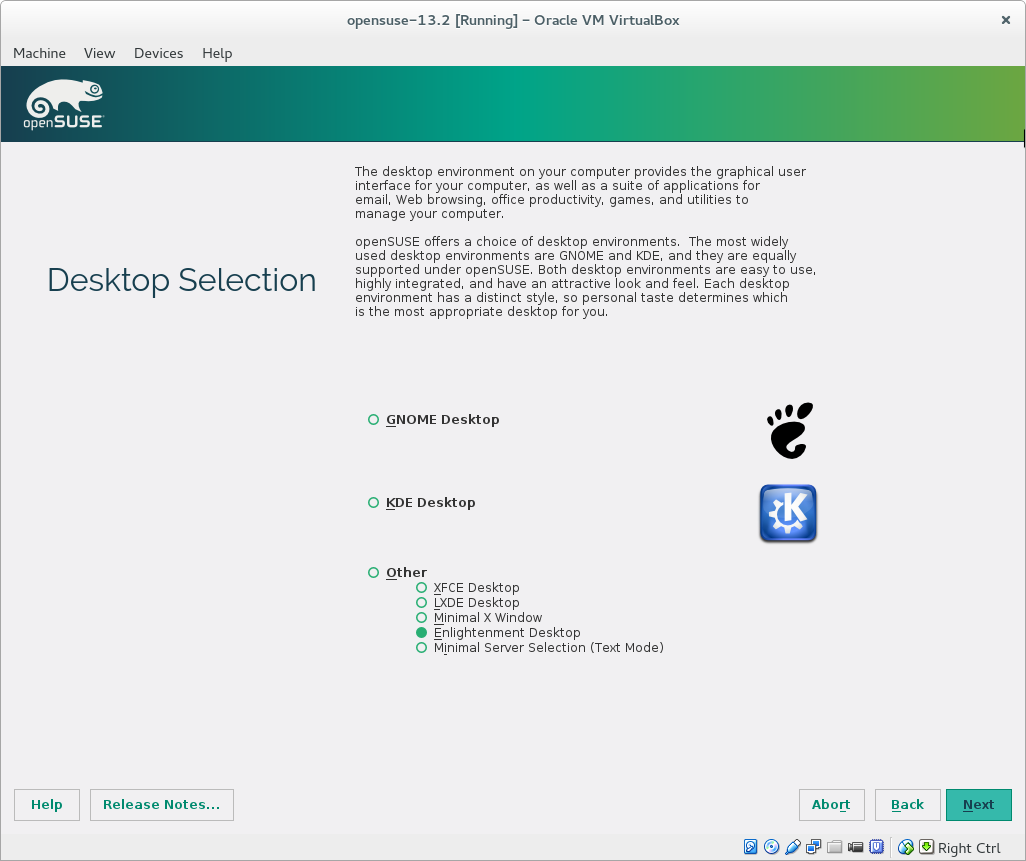 So, I assumed you were seeing what I saw with the DVD installer, and you chose ‘Minimal X Window’ which grants ICEwm (and little else - hence no bloated web browsers), then added Enlightnment packages… which wouldn’t change the desktop setting any more than installing KDE packages on a GNOME desktop would.

I see now, you followed the bouncing ball, and didn’t get what you expected. Clearly, our Enlightenment team has some bugs to fix. Now, I don’t expect you to go fix all that up yourself, but it would be awesome of you to file some bugs at https://bugzilla.opensuse.org about your legitimate issues, so they are brought to the maintainer’s attention.

First off, @sil was totally right

Dammit. I hate that sentence.

Dammit. I hate that sentence.

I know right, but its true.

First time for everything.

it would be awesome of you to file some bugs at https://bugzilla.opensuse.org about your legitimate issues, so they are brought to the maintainer’s attention.

I’d like to; I’m not sure that my notes are sufficiently detailed to make useful replicable bugs, but if they are I’ll try. I am semi-sure that I chose “Enlightenment Desktop” on that installer screen and then was given icewm anyway, but perhaps I ticked it wrongly.

Because I am human

Wait, when did this happen?

No distro review is correct unless it finished with “but nothing beats Arch.”

Beats it for what? Milligrams of ibuprofen needed to manage your headache after getting the wifi to work? Your blood pressure after reading a response to your quest for help on the arch forums? Time spent troubleshooting crashes after system updates?

I do love my arch install, but making it “go” after I inevitably screw something up is less than fun.
EB