This makes me so mad. They claim the 777 went supersonic in the headline, then have to correct that fact in the article.

Leading on from the discussion from a episode or two ago, do you think this is acceptable? 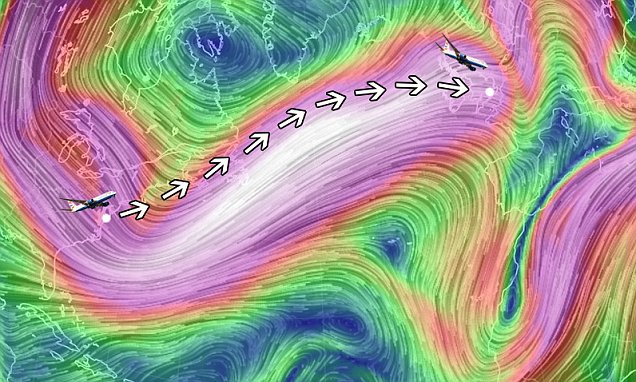 British Airways Flight 114, a Boeing 777-200 jet, took off from JFK at 10.50pm Eastern Standard Time (EST), and landed at Heathrow five hours and 16 minutes later, rather than taking six hours.

The quality of journalism in the Daily Mail is such that I’m expletive deleted amazed when they get the date correct.

I’m not saying that everything they publish is a lie but I am saying that they regularly publish as fact things that are mere opinion or demonstrably false. As such you can’t trust a word they print.

I trust the Daily Mail for news about as much as I trust as I trust Fox news.

There is good journalism around but you have to take your time and cross check with other sources to find it. But there is unfortunately a hell of a lot out there that leaves a lot to be desired.

Yes, I agree, DM is a waste of the paper it’s printed on.

However, most of the shite they spew is opinion, but this is an outright lie (unless they do this all the time, I usually keep well away from DM).

However, most of the shite they spew is opinion, but this is an outright lie (unless they do this all the time, I usually keep well away from DM).

They are also climate change deniers; there isn’t a single reputable scientist denying human caused global warming. To clarify every published paper that throws any doubt on this can be traced to organisations such as the Hartland Institute which are heavily funded by industries such as oil which have a vested interest in spreading confusion and doubt in much the same way as tobacco companies invested millions, into finding links between lung cancer and anything other than smoking.

You can’t be seen as reputable when your career is dependant on you getting particular findings. This does not necessarily mean this is all “bad science” but it does create a level of noise to confuse the issues. I suspect some of this is “bad science” in that the evidence has been cherry picked to draw particular conclusions or that studies showing a link between fossil fuel use and the resultant release in carbon dioxide causing climate change not getting published.

Keeping well away from the DM is good policy.

A large amount of reading between the lines is required if you are to make sense of the Daily Mail prints.

For instance, there wasn’t enough actual news, or even interesting things that happened that day. So, using hyperbole and squinting at the facts with rose tinted spectacles, “Plane goes faster due to a tailwind”, into a story.

I don’t have a dog in this hunt, so I probably will offend everybody, which is not my intention, but rather a result of my observing this “climate” debate for many years and have been nothing but frustrated with it.

Now, my position is: Mankind has managed to ruin our home in so many ways, I would be utterly surprised to find that he has left the atmosphere unchanged. But, that is not science in any way, but my observations.

What this issue has become is more emotional than science. Using words as “deniers” only fans the flames and distracts from the real issues. I heard one person say that “climate deniers” are worse than “Holocaust deniers”. Go figure.

You can’t be seen as reputable when your career is dependant on you getting particular findings.

But that has been the case with the climatologist who support the issue. That’s what I have always said “follow the money”. There are people posed to make much money in the ‘carbon markets’ and such. This whole ‘cap and trade’ is so insincere it’s ridiculous. If there was sincerity with it, remove the ‘trade’ and just have ‘cap’, fine heavily the entity who is violating the ‘green house’ emissions standards and be done with it. But, no, they have to find a way to make money off of it.

And then, I read the papers of both sides of the issue. I read one paper written by two leading ‘scientists’ who were at some conference (this was many years ago) and while they were making their case, they brought up some research that was showing some other factors that was indicative to there being a cycle to earth’s climate. They blew it off because, they admitted, it didn’t fit their models. And that has been the case here, ‘we don’t accept data that doesn’t fit our thinking.’

Now, I work with two ultra-conservatives. The other day I heard “there is record levels of sea ice now.” with a gloat like ‘that will show them’. And I said that in a few months there might be record low levels of sea ice. I’ve read papers of those who are against the issue and would find holes big enough to sail the QE2 through.

My point? With all of it there are vested interests fueled by greed.

Now, since when is science based on democracy? Nothing has been conclusively established, and from my point of view, it can’t be…yet. Why? There is simply not enough DATA to make any conclusions. These guys I work with like to point that out, and I throw it back at them because there isn’t enough data to dismiss anything either. To make a conclusion based on insufficient data is foolish at best.

So, what may happen is that resources are spent that could be used better elsewhere because of greed OR our home might be severely damaged because of the same.

If I offend, I’m sorry. That’s not my intention, but this whole issue is so frustrating to me. I can’t believe any of it.

Now, since when is science based on democracy? Nothing has been conclusively established, and from my point of view, it can’t be…yet. Why? There is simply not enough DATA to make any conclusions.

There is a surprising amount of data suggesting that the climate is heating up and that it is probably as a result of human activity. I’ll be happy take you through it if you like and I’ve read literally hundreds of papers on this.

You are correct in saying science is not a democracy. Science is, or should be, a quest to find the truth and in my opinion the weight of the evidence while not 100% conclusive its very close to it.

To pick up on your point regarding sea ice levels increasing this may be in part because due to increased temperatures glaciers are calving at a faster rate rate meaning there is more ice in certain parts of the sea but significantly less ice on the land.

To pick up on your final point

To make a conclusion based on insufficient data is foolish at best.

In science there is always insufficient data. We examine the data and come to conclusions then try to falsify these conclusions by making predictions and testing the data. If we get contradictory results from our prediction we know our model was wrong and try to redefine our conclusions to fit the observations.

The point being that if we do nothing about climate change and I and the vast majority of Climate Scientists are correct we are headed for global disaster. If we are totally wrong however, and I really hope we are, the costs of minimising the perceived risks is manageable.

The point being that if we do nothing about climate change and I and the vast majority of Climate Scientists are correct we are headed for global disaster. If we are totally wrong however, and I really hope we are, the costs of minimising the perceived risks is manageable.

I guess my frustration is not the issue or debate itself, but rather, the greed and dishonesty that is on both sides. I see greed in pushing for changes for that will mean lots of money for this ‘new carbon economy’, and as such, people will, no doubt, suffer in some way. And then I see, in the attitude for maintaining the status quo, that stockholders are the most important people, for if the climate does change for the worse, people will die, but at least ‘our stockholders will be happy’. I find that attitude reprehensible.

So, no, I have no desire to discuss climate change itself. I’m just too disgusted.

I guess my frustration is not the issue or debate itself, but rather, the greed and dishonesty that is on both sides.

No argument there. This is big business and where there money to be made greed and dishonesty often follow unfortunately.

So, no, I have no desire to discuss climate change itself. I’m just too disgusted.