Pic on the video is the BV listenership map, right?

Not quite, not yet. Although maybe we should start encrypting your stuff and requiring bitcoins to get it back until you listen to the show…

Router discussion was making me laugh. pfSense + UniFi AC Pro works beautifully, I did have to reboot the WiFi AP once in the last year due to a bug (which is now fixed). Netgear and TP-Link consumer gear can be painful.

The whole ‘fake news’ moon on a stick might be getting closer with WikiTribune, perhaps?

ooh, now, I was going to mention WikiTribune during the segment but we veered away from the point where I was going to talk about it. I am a bit sceptical. Jimmy Wales has demonstrated that it’s possible to build a community of collaborators who will work together to build a marvellous resource. However, he has not in my opinion demonstrated that it’s possible to do this sort of thing without there being a lot of politics and people feeling unfairly excluded and pushing an overall point of view. That’s not all that much of a problem when the main body of the work is scientific – there are battles over what the Wikipedia page about nitrogen should contain, I’m sure of it – but it really is when you’re purporting to offer the “objective, above the politics” view. I’ve heard loads of stories about cabals of Wikipedia editors, about it being very undemocratic, about financials being not disclosed, about systematic disenfranchisement at Wikimedia. Now, I haven’t looked into any of this, and I am entirely guilty of assuming there’s no smoke without fire (which is really rather unfair). But setting this up in such a way that it is free from such accusations and remains free from them will be hard. The easiest way for actual partisan opposition to discredit such a thing is to just accuse it of being partisan in the other direction, so the objective truth just becomes one more viewpoint. How Wales (or indeed anyone else) will manage that remains very unclear, in my mind.

This has the worrying consequence that we ask: where are the 96% getting their information? And will building WikiTribune actually help with that? Does trickle-down facts work where trickle-down economics doesn’t?

I agree with @sil that this is a social issue, and I don’t see a Reddit-style website making much of a difference here. We already have more than a few online resources that can help clarify news stories (AllSides covers the political spectrum, VoteSmart (US) and They Work for You (UK) show how politicians vote), and they haven’t exactly made much of a difference.

To name a few issues, people vote out of emotion or perception, and facts don’t typically alter someone’s views all that much (Crime is lower than in the 70s you say? Bull. Back then we used to leave our doors unlocked. Try doing that now!). Modern day problems are also immensely interconnected and complex, and who has the time to devote to gaining enough knowledge about everything to make an informed vote?

Plus, here in the US, most districts and counties voted the way they usually vote. The election came down to a relatively small number of voters in key states. Our culture and politics are deeply polarized, and injecting more facts into the conversation seems unlikely to make rural America turn blue or the cities lean red. We have a much broader problem of concentrated media reducing the number of voices, so we’re all getting our news from a few polarized commercial empires rather than local sources that used to be able to provide more nuance. Better sourcing doesn’t deal with a problem of too few perspectives making it into the public sphere.

I’m so team Stuart on this! I’ll just put this out there for consideration: I’m here, I joined this community specifically, to prove that I am capable of not being a dick (because despite the social punishment for my views on Free software automatically branding me as such elsewhere, I’m really not

). Mileage may vary when it comes to online experiences and thus what can be expected of people.

I would love to see something like Jono described, but I agree with the other hosts that it is hard to see a way for it to exist sustainably through whatever combination of ad revenue, subscriptions, and volunteer contributions would be needed. One critical question which was mentioned briefly is in what way would the general readership (not people spending time researching every angle and submitting content) experience the site? The concept of pulling many view points requires that the final product be completed days after the story first breaks – will many people still want to read about a story then?

Personally, I would. I have been a long time reader of the New York Times, but the Trump has started to burn me out. I have been considering switching my primary news reading to something that comes out weekly like the Economist to give some buffer to the hysteria that surrounds each new twist in political news now.

I kinda like a Wi-Fi button on a router. I’ve used it to switch of the Wi-Fi on the router supplied by my cable company. Also, Wi-Fi ages faster than the rest of the router. So I have turned of the Wi-Fi on a router when I installed a separate access point. It is slightly situational, but useful to me.

This More or Less episode is relevant to Jono’s community fixed news idea. 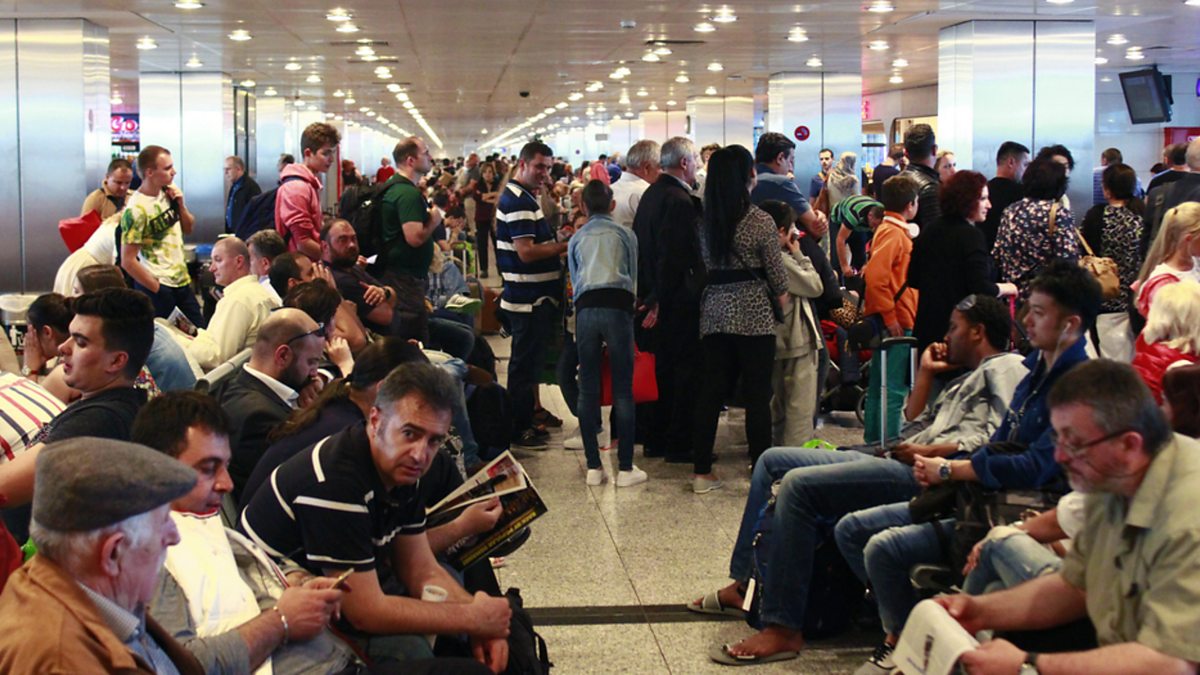 Why airlines take a bet that you won't show for your flight.

The pitfalls of fact-checking
It seems to be a burgeoning age for fact-checkers. There are websites and journalists keen to examine the truth behind what politicians and governments say. More or Less has been part of that tradition for many years. But do people always find these fact-checks persuasive? And when does fact-checking and myth-busting backfire? We take a look at some of the problems.

The segment starts at 6:50. Some quotes:

“You can create a situation that we call a backfire effect whereby people become more convinced of something that is false by you trying to tell them that it is false.”

Good link, very much related to what I just posted, but the wrong takeaway message I think.

The important bit for me isn’t that people don’t read the news, but that it’s easy for people to get confused about what the facts were (as in the paint+petrol example); that repeating false information increases its apparent trust (as mentioned in the show - the echo chamber) but that fact checking it repeats the message again. Finally, even when presented with information that should refute a position, people change their views of the new information to find reasons why there is a problem with it or discount it, as in the vaccination example.

I don’t think its particularly difficult to get a balanced view on the news if you approach the news with a degree of skepticism and consider the motives of those supplying the information.

But, I think it’s far too easy to become lazy and only listen to the sorts of voices that reflect one’s own views. Many of you here may not be surprised to hear I am politically active and belong to a number of left leaning pressure groups. I also follow them on Twitter and elsewhere. I am aware that if this was my only news source then I would get a biased view so I make the effort to listen to voices I disagree with. Doing so ls not always comfortable for me but important to distinguish fact from opinion and downright fiction or ‘alternatve-facts’ or as I like to call them lies.

The issue here is how many people, like me, try to check the facts as opposed to those getting most of their information from a few chosen sources who are pushing a particular set of ideas. One example of this is that I don’t believe the Guardian newspaper would deliberatly misrepresent the facts but most of its editors and columnists are on the left of UK politics so probably leads to a slight, but unintentional, bias in which stories they choose to report on.

I can name several other news sources, both online and in print who are happy to mislead to push their ideas.

For years it had been:

Hoaxes: Pizzagate, etc.
Fake news: Most of what cane out of news organizations. NBC, CBS, ABC, FOX, NY Times, The Guardian, etc.
Real news: What’s the latest with Brad and Angelina or William and Kate? OOOHHHH, another royal baby?

Really? ,You didn’t know about Julian Assange and Pamela Anderson? Get with the gos girl!

In the show description @sil missed:

I look forward to that review!

I dream of one day soon replacing my old router with something more prosumer/SOHO. Either Ubiquity, Mikrotik (which I think was also featured on Bad Voltage in the early days), or a mish-mash with a Cisco RV325 at the center.

I’m running out of ports* for hardwired connections (consumer routers only come with four ports), and as summer approaches I’m getting frustrated with the weakness of the Wi-Fi outdoors (I know my router is poorly positioned for Wi-Fi but it’s perfectly positioned to plug into my ISP’s cabling).

So I would like to know why Ubiquity? What else was considered? And is there such a think as a mesh network with outdoor-grade AP’s (rain, snow, and cold temperatures)?

* I know I could add a cheap switch for more more ports, but that’s more cables, and wires, and power warts added to the tangled mess that already exists in my DIY rack

Regarding ransomware, things could get really ugly.

“Fake news” isn’t a new phenomenon, it was used even by Hitler to blame the press for their unfavorable view on him. It’s the first line of attack used by current and aspiring autocrats.

But in reality, each country has a slightly different problem with “fake” news. The worst of them can only be solved with active counter-intelligence efforts, like in the case of the shadow companies who used highly advanced data analysis methods to find and target vulnerable members of society and change their minds to vote for Brexit, or like in the case of Trump and the Russians who hacked the DNC and the RNC and used the drip-drip method to tire out the voters from Clinton.

There are also cases where the press is very biased. In that case, you won’t convince anyone by showing them the actual facts because that makes them stick to their beliefs even more. The best way is less bias and less hysteria. I still remember the Al Gore voters who were sobbing when he lost to Bush, or the republicans who were in tears when McCain lost to Obama. No one cries because their favorite politician lost the race, the American voters have been trained to expect the end of the world every time the other side wins. And that has turned the entire political climate so toxic to the point where it’s become impossible for the parties to agree on even the most simple problems.

Therefore, I don’t think that crowdsourcing will solve anything. The problem is that people have stopped talking to each other; it’s like the Texans who get blamed for being total climate denialists, even though the largest US windmill plant is in Texas. So maybe today is the time for some handholding and listening to the other side instead of trying to create some fancy mathematical methods that promise to uncover the truth one hundred percent of the time.

P.S. Sorry for the ramblings.

just realized that WikiTribune was finally up and going now.

maybe you could mention it in next week’s podcast.