Jono Bacon, Jeremy Garcia, Bryan Lunduke, and Stuart Langridge bring you Bad Voltage, in which all your credit cards still have magnetic stripes on, there is a disturbing level of coincidental alignment in views of the future, and:

The next show will be Live Voltage at SCaLE 14x! See you in Los Angeles!

Also, I’m curious about the scale Microsoft sponsorship…did they come to you guys? What are they ponying up? Just curious.

I did see that they open sourced Chakra, and was very encouraged by it!

The only practical thing I heard regarding that Coin credit card is the suggestion that @jonobacon made of getting his grandfathers coin purse. Quite handy those things are. With mine, I can roll up a paper that has my AARP membership number on it, keep a coupon for Ensure or know a handy place for a Geritol tablet. Seems much more useful than a silly card.

I understood one term in the entire interview with Jorge Castro: Lego’s

Thanks for this wonderful show. I really enjoyed it!

I liked the predictions, but I strongly disagree with the predictions on Canonical. Especially, the Ubuntu Phone part. I will really go so far as to say that I feel like you guys “Stuart (@sil) and Bryan (@bryanlunduke)” are a little biased against Canonical.
Now that all sounds very harsh, but it’s just a feeling I have when listening to your shows.

Before you ask, no I don’t work for Canonical.

Bryan always talks about Ubuntu Phone like he somehow wants it to fail or loves to dismiss it. Again, this is a feeling I have when listening to the show. It’s very likely that I’m wrong.
I suspect it has something to do with Unity in particular. Of course it’s all taste. But one can’t just scrap Ubuntu off the list, just because he or she doesn’t like Unity. Actually, I think a lot of people like Unity and WILL try Ubuntu Phone because off Unity 8 (and convergence).
I don’t understand why one would get the notion that Canonical will abandon Ubuntu Phone. Are these predictions just fun guesses or are they based upon ‘evidence’, because Canonical might be starting the year showing off a new piece of hardware: 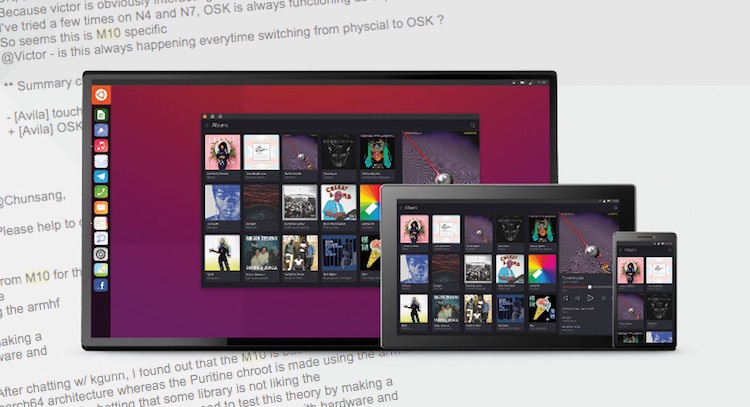 New Ubuntu Convergence Device Will Be Demoed Next Month

To come back to the Unity thing… For me, a desktop manager should match the following points:

I use Unity for programming and it’s currently the only Manager that does al the above points correctly. Of course, I have to admit that Unity still suffers from bugs and glitches, but those aren’t a big deal really.
First off, all the apps are full screen, thanks to the integrated menu’s and the hidden sidebar. I don’t need a separate title and menu bar, It’s just unnecessary. I just don’t want to waste an inch of my screen to information I don’t need. Put the focus on the software I’m currently using!
Secondly, Unity is user friendly. YES the dash is a mess in a few places, but I use it quite a lot. The dash has all the features I need, unlike the other application menu’s in the Linux world. I’m always able to find my documents and programs via the search engine, it’s easy to search and install new applications, It shows me recent documents and programs, etc…
Other than that, the lenses (not talking about the home and application lens) and 3 year old bugs are garbage, but it doesn’t outweigh the positive features.
Also the hud is awesome and very handy in applications like gimp and inkscape.
To end my rant… Unity just looks good. I know a few parts of the Unity 7 desktop look like they were designed in the year 2000… But take a look at Unity 8, it looks simply gorgeous. I find the different colors, when an application is active in the task bar, to be very distinctive (unlike Windows 10, where I have to refocus my eyes to see which programs are active).

Please, I’m only describing my personal experience with the Linux desktop (I also tried other distro’s and Desktop managers). So don’t take it personal yourself!

BRYAN YOU ARE THE REASON WHY I STARTED WATCHING BAD VOLTAGE, so I definitely have nothing against you!

I look forward to you next Linux Sucks video. You may have noticed the million views I gave you on the previous one.
The reason why I keep on listening to Bad Voltage, is because I love funny but educated hosts like Bryan and Stuart who are very opinionated and have an entertaining way in sharing their opinions!

Also, good day to Jono and Jermey. Keep up the good work guys!

I’m probably wrong on everything I just said! Beye.

I was pretty excited about this when I saw the kickstarter and signed right up. I dont think I’ve had a single successful transaction with it though. So now it sits in my wallet along side all my other cards. So George Costanza wallet mode still enabled.

“Stuart (@sil) and Bryan (@bryanlunduke)” are a little biased against Canonical

Can’t speak for the Duke, but for myself, I’ve published three of the top 100 apps on Ubuntu phone and I own three such phones, which I don’t think counts as being biased against it. Thinking it’s not gonna work is not necessarily bias

On the predictions, there kind of already exists a bendable phone. It bends only a little, but the LG G flex (2) does bend… So does this count as a prediction?

I myself am personally of the opinion that a “flexible” display (and a “flexible” phone) can be bent in half. Being able to tweak it three degrees away from the vertical is not flexibility. The Empire State Building moves more than that in high winds. So anyone attempting to claim that that validates the prediction will be mercilessly mocked.

Fair enough, in that sense it is a rather risky prediction, which is brave enough. I like most of these predictions, makes me look forward to the rest of this year.

Wow, yeah… You are right and I’ll have to apologize! That does not sound as ‘biased against’ at all.

I usually listen to the show while commuting, and often laugh out loud to the curious and/or annoyed stares of commuters around me.

Today while listening to the segment on Coin I wanted to yell out loud at not only @jonobacon but @sil too!

The Coin product is clearly targeting the American market, where mag-stripe is still the prevalent card reader technology. Just like Samsung’s wallet is irrelevant outside the USA.

Second of all, check-out the Stocard app on your phone. It holds all your loyalty cards, and for quite a few it can show you your points balance.

In fact, I should probably have been yelling at @jeremy since I expected him to jump in put an end to this non-sense but he never did!!! It was like that show when he was absent and those other three jokers could say what ever they wanted.

Thanks, that was cathartic.

I myself am personally of the opinion that a “flexible” display (and a “flexible” phone) can be bent in half. Being able to tweak it three degrees away from the vertical is not flexibility. The Empire State Building moves more than that in high winds. So anyone attempting to claim that that validates the prediction will be mercilessly mocked.

There is no way there will be any screen you can fold in half released in 2016 and that was not my prediction. The Flex is a phone that is slightly curved and will not break when you, well, flex it a bit. The spirit of my prediction is somewhere in the middle of those two and if the Flex is the most bendable device of 2016 then my prediction will be a fail.

I worked for two years for a company creating an electronic wallet you can install on your smartphone and use NFC to pay with, and I can tell you there is a tremendous amount of problems to have this kind of project going mainstream:

In the end, I think the mix of technical complexity and partners that are unable to all go in the same direction for the sake of the project make the whole thing very unlikely to success for the time being.

I love funny but educated hosts like Bryan and Stuart who are very opinionated and have an entertaining way in sharing their opinions!

You hear that, Stu-Stu? We’re funny and educated! Look at us be all fancypants!

Wow, yeah… You are right and I’ll have to apologize! That does not sound as ‘biased against’ at all.

Yeah, I don’t think either Stuart or I are biased against Ubuntu as a phone platform. Speaking for myself, I tend to be rather hard on it because I see so much potential that every misstep and missed opportunity gets me all cranky.

Mark just finished his keynote at scale and it doesn’t sound like Canonical is planning on scaling back on mobile.

Were we listening to the same keynote? He didn’t mention phones at all! All snappy and juju.

2 Likes
next page →
Please respect our code of conduct which is simple: don't be a dick.